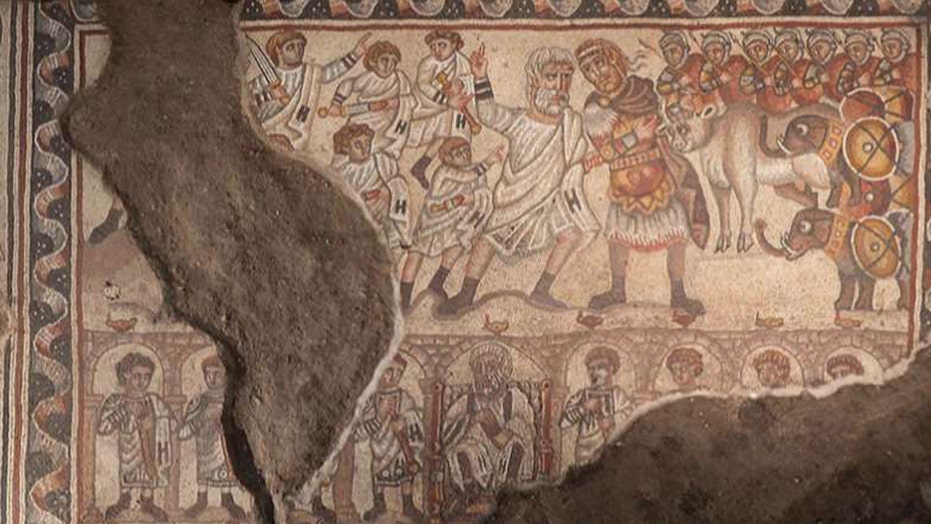 A remarkable mosaic unearthed during the excavation of an ancient synagogue in northern Israel may portray Alexander the Great.

Experts are thrilled to reveal the mosaic that was discovered on the floor of the fifth-century synagogue in Huqoq. “The quality of the mosaic is extraordinary, the fact that it may depict a meeting between Alexander the Great and the Jewish high priest is also amazing,” Excavation Director and University of North Carolina at Chapel Hill Professor Jodi Magness told Fox News Monday.

The purported Alexander the Great mosaic is the first non-biblical story ever found decorating an ancient synagogue.

Magness explained that the mosaic is divided into three horizontal strips, known as registers, which are read from bottom to top. The top register, which is the largest, shows a meeting between two male figures that are bigger than the other figures portrayed, highlighting their importance.

One figure, an elderly bearded man dressed all in white, is believed to be a Jewish high priest. Magness explained that the other figure, who is younger, but also bearded, is dressed in an elaborate military outfit and has the trappings of a king, such as a diadem, or headband that indicates sovereignty, and a purple cloak.

“He is accompanied by all sorts of figures that indicate that he is a Greek king – there’s a Greek military formation next to him, there are battle elephants,” Magness said. “These are all things that are associated with the Greek kings from the time of Alexander the Great on.”

However, the professor notes that the meeting between Alexander the Great and the high priest depicted in the mosaic probably never occurred. “This was a story that was circulated a lot in antiquity,” she said. “In the centuries following Alexander the Great’s death when he became so famous that he became ‘the Great’, the Jews sought to associate themselves with Alexander and stories began to circulate about a meeting like this having taken place.”

Not everyone is convinced the mosaic shows the famous Macedonian king. Art historian Karen Britt of Western Carolina University, who is the excavation’s mosaics specialist, believes that Seleucid King Antiochus VII is depicted, according to National Geographic. Antiochus VII led a Seleucid attack on Jerusalem in 132 B.C. and Britt believes the mosaic shows him negotiating a truce with Jewish high priest and Judean leader John Hyrcanus I.

"We came to the conclusion that the story being depicted in the mosaic simply does not correspond to the Alexander traditions," added Ra‘anan Boustan, an associate history professor at UCLA, in an email to FoxNews.com.

Boustan, who worked on the project with Britt, explained that the defeated army depicted in part of the mosaic does not fit the history of Alexander the Great's early conquests in the Middle East. Instead, Boustan saw evidence of the later Hellenistic kings, who maintained Greek traditions.

"Right there in an impressive range of ancient sources, both Jewish and non-Jewish, we found a story about the siege of Jerusalem by a later Seleucid king named Antiochus VII Sidetes, who battled with and ultimately made peace with one of the most famous and admired Jewish leaders of the Hellenistic period, the high priest John Hyrcanus," he wrote. "Not only did the story told in the sources match the details of the mosaic, but text and art both seemed to capture the spirit of the encounter between Jew and Greek, which was characterized by tension as well as mutual respect."

The Huqoq site offers a fascinating glimpse into the life of an ancient Jewish village in Israel’s lower Galilee.

Excavations at Huqoq began in 2011, and the first mosaic was discovered the following year. Notable mosaics unearthed at the site include Samson carrying the gate of Gaza on his shoulders, which was discovered in 2013.

This summer the excavation team also unearthed stunning mosaics depicting Noah’s Ark and the parting of the Red Sea. Further excavations at the site will continue next summer.

The mosaic allegedly depicting Alexander the Great was excavated in stages between 2013 and 2015. “Only a portion of it had been released to the public previously,” Magness told FoxNews.com. “This is the first time that an image of the entire mosaic has been released.”

The mosaics have been removed from the site for conservation and all the excavated areas have been backfilled, Magness said. “We hope that the site will be developed for tourism after the excavations end,” she added.