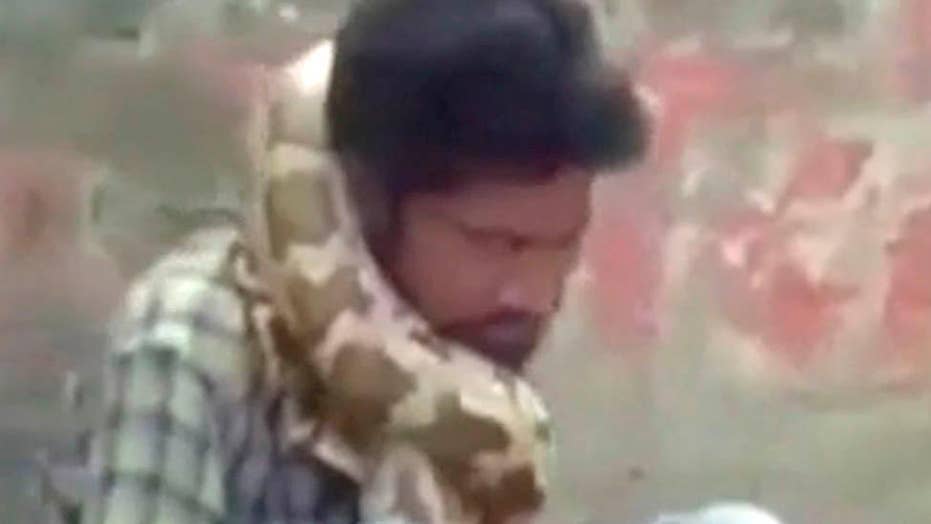 WATCH: A snake charmer's live show in Uttar Pradesh, India went horribly wrong when his deadly python strangled him in front of his audience.

At first, people thought it was part of an act: a deadly python coiled around the neck of its owner and snake charmer during a live show in Uttar Pradesh, India, this week.

But they soon found out the act was all too real.

The snake charmer initially picked up the adult snake and allowed it to sit on his shoulders as he welcomed the crowd. Slowly, the snake slithered up the man's body and started to wrap itself around his neck.

The man appeared calm – acting as if he was simply wearing a turtleneck. He continued to motion people to come closer.

Thirty seconds later, the man kneeled on the ground and appeared to be having trouble breathing. He leaned forward and grabbed the snake's body, attempting to forcefully pull the creature off.

For nearly a minute, a group of people just watched in shock and horror. They realized the man was in serious trouble when he toppled over onto the sandy ground.

He appeared to be unconscious when a man stepped in to help. He sprinkled water on the snake and eventually the python slitered away.

A group of three men rushed the unidentified man to a nearby hospital in Varanasi on March 20, according to The Independent. His condition is still unknown.

Snake charmers are common in India, but the reptiles have been known to turn on their handlers.

A famed "snake whisperer" in Malaysia died last week after he was bitten by a cobra, Free Malaysia Today reported.

Last year, Dan Brandon, a snake enthusiast in the U.K., was found suffocated to death near his pet python, “Tiny.” A coroner later confirmed there was “no doubt” the python had killed him.