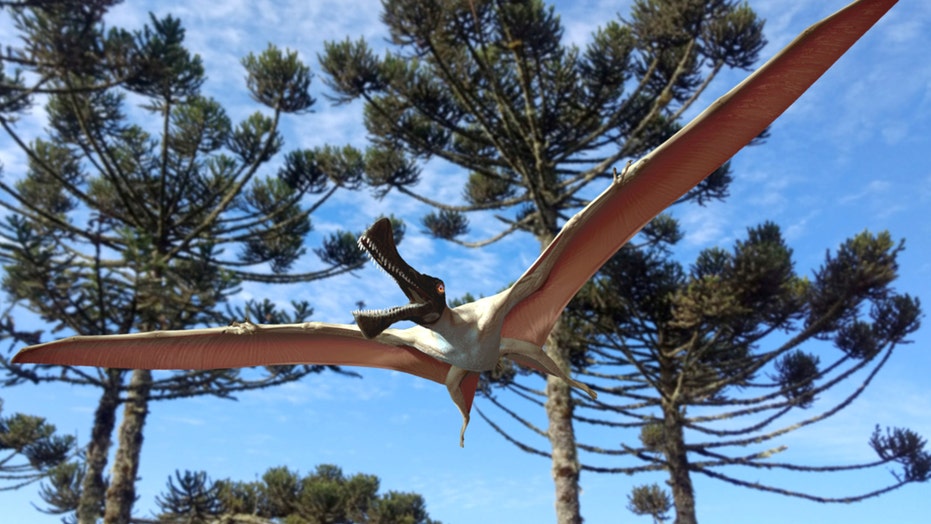 The fossil of a 96-million-year-old pterosaur has been discovered in the Australian outback.

The remains of the giant flying reptile, which had a 13-foot wingspan, are considered among the best ever discovered, according to paleontologists. It has been named Ferrodraco lentoni, which means "iron dragon" in Latin.

"This new pterosaur, Ferrodraco, had a wingspan of approximately 4 meters (13.1ft) and a head 60 cm (2ft) long," one of the study's authors, Adele Pentland, a paleontologist at Swinburne University, said in comments obtained by SWNS.  "This is based on comparisons with similar pterosaurs. It would have been an apex aerial predator."

This new pterosaur, Ferrodraco, had a wingspan of approximately 4 meters and a head 60 cm long, based on comparisons with similar pterosaurs. This pterosaur has a large crest at the front of its upper jaws, and also had a crest on its lower jaws, however the latter is broken and its presence has been inferred from CT scan data. (Credit: SWNS)

Pentland added: "This pterosaur has a large crest at the front of its upper jaws, and also had a crest on its lower jaws. The latter is broken and its presence has been inferred from CT scan data."

Along with its massive wings, the giant pterosaur had a head two-feet long, crests on both its upper and lower jaws and contained "unique dental characteristics, including small front teeth," which Pentland said make Ferrodraco different from other anhanguerians, making it a new species of pterosaur.

Pentland said that the Winton area, which is now comprised of sheep and cattle farms, was full of long-necked sauropods, carnivorous theropods (including T. rex), ankylosaurs, ornithopods, as well as pterosaurs. Although pterosaurs are often lumped in with dinosaurs, they are a different species.

Given the nickname "Butch," after a local mayor, Pentland said the skeleton is well preserved, even for an area that has been described as a "dinosaur graveyard" by other researchers.

"With a total of 30 bones preserved, or 10 percent of Ferrodraco's skeleton, the number of pterosaur bones reported from Australia has now tripled," Pentland said.

One of the study's co-authors, David Elliott, said Butch is an exciting addition to the area.

"The Winton area has produced the majority of Australia's large dinosaur fossils so presenting a significant pterosaur skeleton alongside the giants with which it co-existed is a huge bonus for science, education and regional tourism," Elliott said, according to SWNS.

The research has been published in the journal Scientific Reports.

Last month, researchers discovered an ancient reptile known as the “flying dragon of the north,” said to be the largest flying animal that ever existed, in Canada.