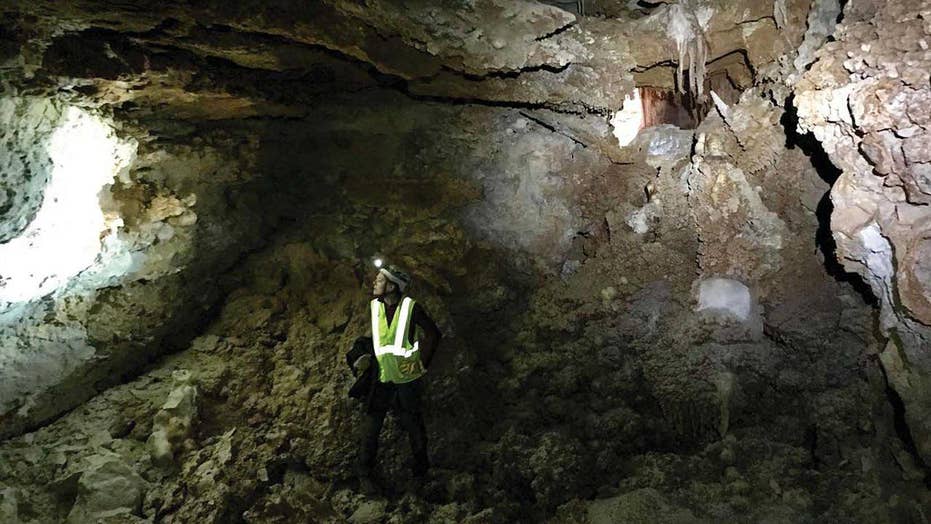 Broken water pipe in a residential neighborhood in Texas leads to a discovery that is millions of years old.

Residents of a Texas neighborhood recently discovered something unusual: For years, unbeknownst to them, they were living a few feet away from an ancient tunnel believed to be millions of years old.

A scientist explores the cave entrance , which is about 20-22 feet high. (Williamson County)

“They feel that this is a closed cave and that it has never had an exterior expression so that an animal or people could go in and out of the cave. They found no evidence of life inside this cave, and it could’ve been here at 10 million years,” said Williamson County Public Affairs Manager Connie Odom.

The tunnel, underneath a roadway, was discovered after residents one day complained about a lack of water. Recently, the cave unexpectedly collapsed, causing the water pipe to break. It also exposed part of the cave.

“The homeowners in the area had called the utility district saying that they were having water issues. And so, when Municipal utility district workers first came out, they discovered that a water pipe had broken. And there was a cave underneath the street,” Odom said.

“It’s kind of quiet now. But, it’s not normally like this,” said resident Tim Kelley, whose house sits adjacent to the site. He and his neighbors have congregated on the street for the past several weeks, watching drilling rigs, engineers, and cave experts working at the cave.

One of the cave's four chambers. Experts say the cave is millions of years old and has never been accessed by an animal or person. (Williamson County)

Odom said the cave stretches underneath two homes, has four chambers, and is about 20 to 22 feet high, at its tallest, by the cave entrance. The cave ceiling is about 6 to 8 feet underneath the roadway.

Caves in Central Texas are common. In fact, the Brushy Creek Municipal Utility District, where the cave is located, maintains 40 caves.

But Odom said this is the first time the county has found one under an existing roadway, providing unique complications.

“It’s been a new experience for us and then working very closely with the neighborhood to determine how we can repair the roadway and working with the Texas Commission on Environmental Quality on approving those plans,” said Odom.

Some residents said they’re worried that the cave could decrease the resale value of their homes.

“People feel like a lot of people will be nervous to buy house that’s that close to the cave because they think it’s not safe,” said Kelley.

However, the county hasn’t dug that far into the issue just yet.

Engineers had gathered core samples by the entrance of the cave in an attempt to test the strength of the soil and limestone. They are expecting to receive the core analysis reports by the end of the week.

Upon receiving the engineering report, the county says it will come up with remediation options and work with the Texas Commission on Environmental Quality to choose the best plan of action to repair the roadway.