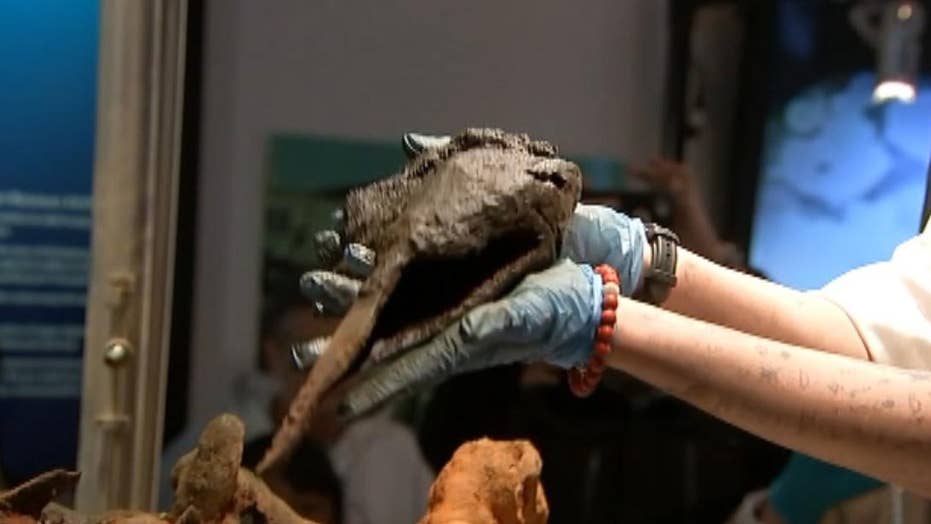 The femur of Captain “Black Sam” Bellamy, the world’s richest pirate, may have been found in a large concretion aboard his sunken ship, the Whydah Gally. Researchers are conducting DNA tests to see if it really is the remains of the famed pirate.

A mysterious human bone recovered from Cape Cod’s Whydah shipwreck does not belong to a notorious English pirate, experts have confirmed.

The Whydah Pirate Museum in Yarmouth, Mass. announced Thursday that the bone is not from infamous pirate Samuel "Black Sam" Bellamy. The museum had enlisted forensic scientists at the University of New Haven to extract DNA and compare it with DNA from a living Bellamy descendant in the U.K.

The testing determined that the bone was from a male with general ties to the Eastern Mediterranean area, but was not Bellamy.

The Whydah sank in a storm in 1717, with the loss of 102 lives. Bellamy's body was among the 40 that were never found or identified. The wreck was discovered in 1984.

The museum publicly displayed the mystery bone in February. The bone, thought be a femur, was found near what's believed to be Bellamy's pistol.

The bone had been extracted from a 3,600-pound “concretion” — a large chunk of hardened sand and artifacts taken from the wreck a number of years ago, the Cape Cod Times reported.

Over 200 concretions have been located at the wreck site.

Since its discovery, some 20,000 coins have been recovered from the wreck, although most of its treasure is thought to remain on the ocean floor. Coins and precious metals from the wreck have been valued at more than $400 million, according to Coinworld.

Bellamy had seized 54 ships in just over two years prior to the Whydah’s sinking, fueling speculation that the wreck is treasure-laden. Forbes has listed the English pirate as the highest-earning pirate ever, plundering about $120 million worth of treasure in a little over a year.

Pirate-related archaeological finds continue to be a source of fascination. Experts, for example, recently made a remarkable discovery about pirates’ reading habits after deciphering paper fragments recovered from the wreck of Blackbeard’s ship.

In 2015, treasure said to belong to pirate Captain Kidd was found by divers off the Indian Ocean island of Madagascar.