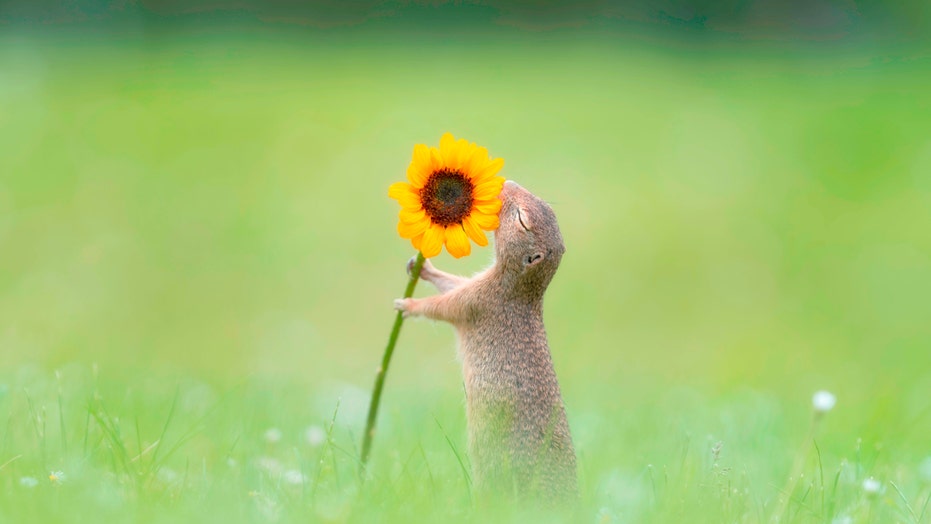 Sometimes it pays to stop and smell the flowers.

A photographer from the Netherlands has captured remarkable photographs of a squirrel smelling a yellow flower.

Renato Just was walking through Vienna, Austria when he spotted the miniature mammal standing up on its hind legs to pull the petals toward its face, British news agency SWNS reports. Just said the images required "a lot of patience," as he took more than 2,000 pictures to get "four or five" he was happy with.

"Spending eight or nine hours lay on your front isn't the most comfortable experience," Just said. "But I like the effect the photographs have on people when you show it to them for the first time."

The gray land squirrel was captured as it stood on its hind legs and gripped a flower stem in its paws to pull yellow petals toward its face. It then seems to enjoy a moment of bliss as it smelt the floral aroma. (Credit: SWNS)

He continued: "It's something you don't see every day and if you're having a bad day, you can't fail to smile at them. They capture nature at its most beautiful."

Just is the second photographer in recent memory to capture a ground squirrel smelling a yellow flower. In September, Dick van Duijn, also from the Netherlands, said he spent two hours and took roughly 200 photos in order to capture the moment.

The European ground squirrel, also known as Spermophilus citellus, are normally found in eastern Europe. In 2013, the European Union put together a plan to save the endangered mammal, after population figures declined over the several decades.