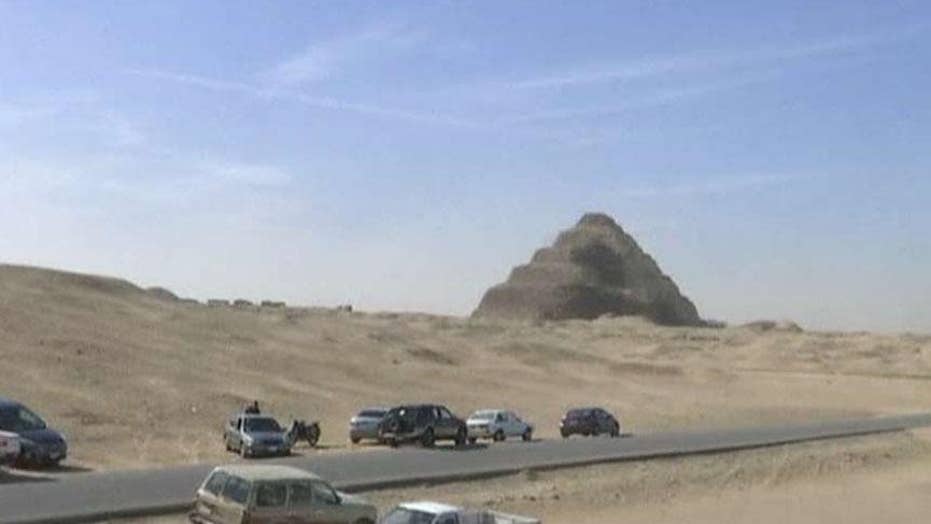 Archaeologists in Egypt uncovered the final resting place of a high priest that dates back more than 4,000 years ago.

The tomb, which was found in the Saqqara pyramid complex near Cairo, is filled with colorful hieroglyphs and statues of pharaohs, National Geographic reports. Some of the scenes show the owner, a royal priest named Wahtye, with his mother, wife and other relatives.

This burial is “one of a kind in the last decades,” said Mostafa Waziri, secretary general of the Supreme Council of Antiquities, in a statement. "The color is almost intact even though the tomb is almost 4,400 years old."

This picture taken on December 15, 2018 shows a view of a newly-discovered tomb belonging to the high priest "Wahtye" who served during the fifth dynasty reign of King Neferirkare (between 2500-2300 BC), at the Saqqara necropolis in Egypt. KHALED DESOUKI/AFP/Getty Images

The tomb owner served King Neferirkare. In addition to the name of the deceased, hieroglyphs carved into the stone above the tomb’s door reveal his multiple titles.

The grave’s rectangular gallery is reportedly covered in painted reliefs, sculptures and inscriptions, all in excellent shape considering how much time has passed.

GIZA, EGYPT - DECEMBER 15: An inside view of Saqqara excavation site after a 4,400-Year-Old Tomb belonging to Pharaohs era has been discovered in Giza, Egypt on December 15, 2018. (Ahmed Al Sayed/Anadolu Agency/Getty Images)

The reliefs depict Wahtye himself, his wife Weret Ptah, and his mother Merit Meen, as well as everyday activities that include hunting, sailing and manufacturing goods such as pottery, according to National Geographic. The tomb features a total of 45 statues, including large painted statues of the priest and his family.

The team of Egyptian archaeologists working here found five shafts in the tomb, several of which are sealed and could contain other exciting finds.

A view inside a recently uncovered tomb of the Fifth Dynasty royal Priest during the reign of King Nefer Ir-Ka-Re, named "Wahtye", at the site of the step pyramid of Saqqara. (Photo by Mahmoud Abdelghany/picture alliance via Getty Images)

“This shaft should lead to a coffin or a sarcophagus of the owner of the tomb,” said Waziri, indicating his best guess for the location of finds to come. Other shafts might hold the grave goods of the deceased.

In recent years, Egypt has heavily promoted new archaeological finds to international media and diplomats in the hope of attracting more tourists to the country. The vital tourism sector has suffered from the years of political turmoil and violence that followed a 2011 uprising that toppled autocrat Hosni Mubarak.