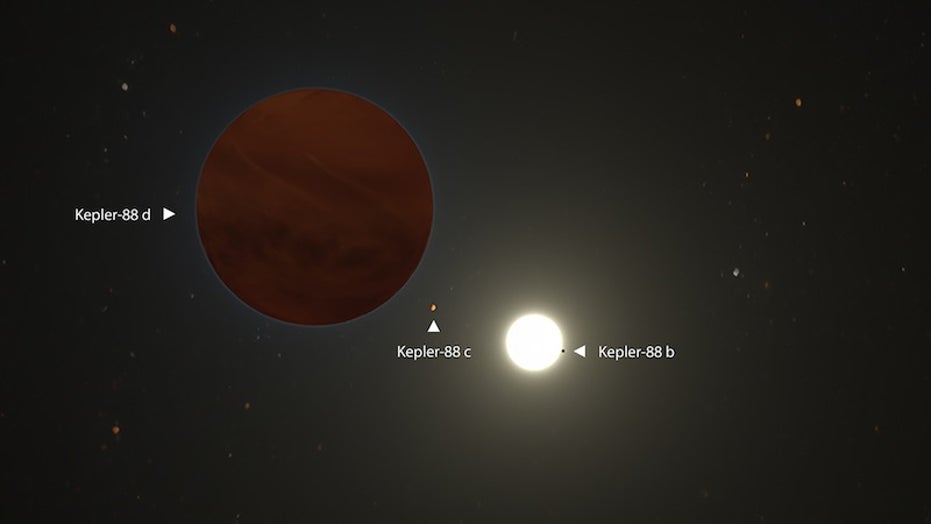 A newly discovered exoplanet more than 1,200 light-years from Earth has three times the mass of Jupiter and is the new "king" of its solar system.

Known as Kepler-88 d, it replaces Kepler-88 c as the largest planet in the system. The planet orbits its star once every four years and has an elliptical orbit, researchers noted in a statement.

"At three times the mass of Jupiter, Kepler-88 d has likely been even more influential in the history of the Kepler-88 system than the so-called King, Kepler-88 c, which is only one Jupiter mass," said Dr. Lauren Weiss in the statement. "So maybe Kepler-88 d is the new supreme monarch of this planetary empire – the empress."

The massive exoplanet, at just over 1,250 light-years from Earth, was found using six years' worth of data from W. M. Keck Observatory in Maunakea, Hawaii, the researchers added. A light-year, which measures distance in space, equals 6 trillion miles.

The Keppler-88 system has notoriety amongst astronomers because the other two planets, Kepler 88-b and Kepler 88-c, have "a bizarre and striking dynamic called mean motion resonance," with both planets orbiting the star in 11 and 22 days, respectively.

Kepler 88-b is smaller than Neptune, while Kepler 88-c is comparable in size to Jupiter, the largest planet in our solar system.

The discovery of Kepler 88-d can add to astronomers' understanding of the star system, given that massive planets can influence their respective solar systems.

In the past, they have been found to "promote the development of rocky planets and directed water-bearing comets toward them," the researchers added in the statement.

The research was published in the Astronomical Journal.