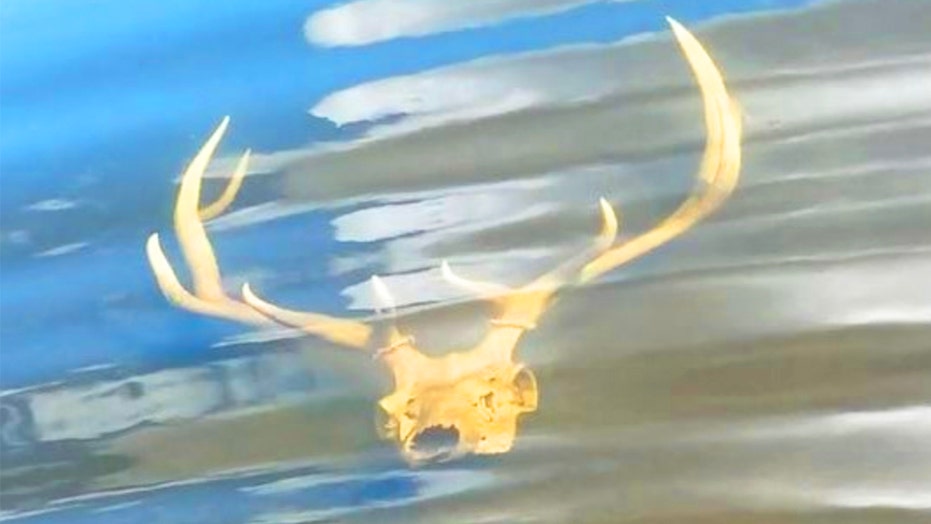 A conservation officer made an eerie find in northern New Mexico this week: an intact elk skull submerged in center and just below the surface of a shallow pool.

Ross Morgan, a spokesman for the New Mexico Department of Game and Fish, said such discoveries were relatively common.

He said officials had several theories about how the skull got in the lake, but were unsure of how exactly it died.

One possibility is that it could have died over the winter, when the pond was frozen, and had its carcass hauled off by a predator before the ice thawed and the remaining skull sank. But, the skull could have fallen into the center of the pool in many other possible ways, too.

“Animals tend to head towards water when they are injured,” Morgan noted.

The New Mexico Department of Game and Fish shared photos of the find on Facebook Wednesday. They showed the antlered skull near the center of a little spot of water amid a grassy meadow.

Officer Lonie Morales made the find while out on patrol at the Sargent Wildlife Management Area (WMA), according to the post.

New Mexico has closed almost a dozen parks or wildlife areas due to the coronavirus pandemic, but the Sargent WMA does not appear on the list of shuttered locations posted on the department’s website.

Elk are common in the area, which extends from an area north of Chama in Rio Arriba County to the Colorado state line, according to state officials.

Visitors to outdoor areas in general are encouraged to practice 6-foot social distancing guidelines, and the department has shared a comical infographic explaining how to achieve it.

The New Mexico discovery is not the only elk-skull find this week, either.

Jason Star of Cedar City, Utah, found another one recently while searching for shed antlers, according to the state’s Division of Wildlife Resources.