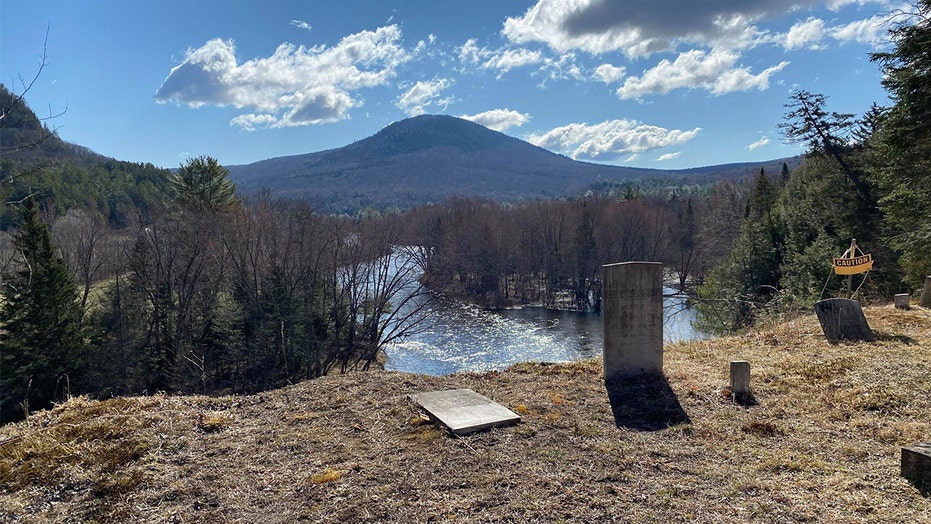 A winding river in northern New Hampshire is eroding the bluff beneath a historic cemetery there -- and human remains have already been recovered along the bank, according to a local report.

Stark, with a population of just 556 as of the last census, sits in the Great North Woods of Coos County and is best-known for its World War II-era prisoner of war camp, which housed captured German soldiers at the time, according to the town’s website.

But its historic Blake Cemetery, established in 1802 and active until the early 1900s, is at risk of being washed away due to erosion from the Upper Ammonoosuc River.

Headstones have fallen from the bluff into the river. (Courtesy: Maylynda Emerson)

The graveyard is the final resting place of three veterans of the Revolutionary War, according to the New Hampshire Union Leader. And their graves are just a few yards from the edge of the bluff.

Other headstones are closer to the ledge, and state police recovered a human skull from the riverbank last week.

Images said to be taken in the area were posted to Facebook and show multiple gravestones in shallow water at the foot of a bluff.

Some of the graves belong to Revolutionary War and Civil War veterans. (Courtesy: Maylynda Emerson)

She said that she was looking for turkeys on the opposite side of the river with her husband and mother-in-law when they told her about the graveyard’s erosion issues. When the trio went to take a closer look, she said she saw how bad things were up close.

“We were truly shocked to see the condition it was in,” she said. “When we got home, I decided to put it online to see if we could really spread the word and maybe get some info on how to raise money.”

The town had already been looking for ways to solve the problem, Emerson said, but after her post, state officials were actively looking at the area, as well.

New Hampshire Fish and Game announced Thursday that its dive team would search the river for additional human remains and gravestones.

A spokesperson for New Hampshire Fish and Game did not immediately respond to a request for comment.

State archaeologist Mark Doperalski told the Union Leader that the erosion had been ongoing “for a long time,” and that while he would normally recommend leaving graves in place, in this case they might need to be moved to safer ground.

A winding river in northern New Hampshire is eroding the bluff beneath a historic cemetery there. (Courtesy: Maylynda Emerson)

Historic cemeteries face a number of threats, both natural and manmade. Some are neglected and left to the mercy of forces of nature, such as erosion and overgrowth. Others have been maintained over the years but inadvertently damaged by things such as lawnmowers or weed whackers, which can damage gravestones.

Historians and conservationists say they are also subject to vandalism.