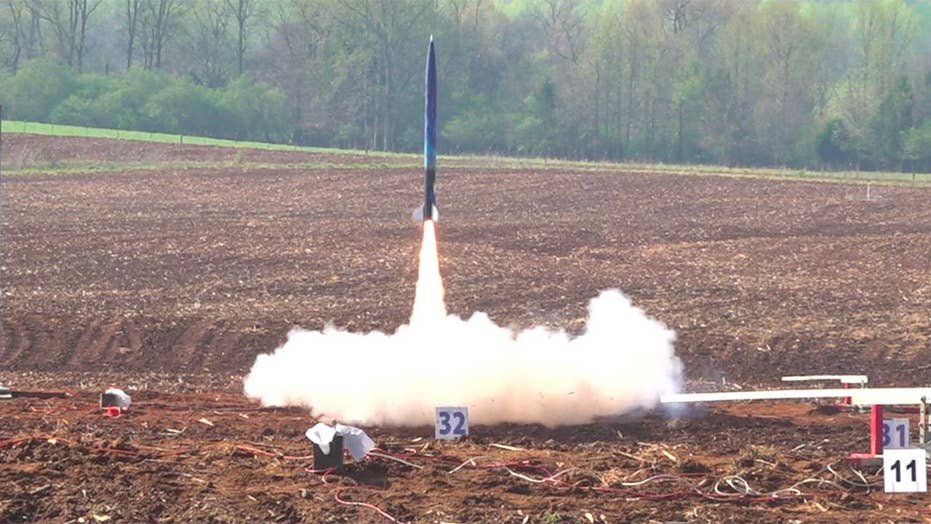 HUNTSVILLE, Ala. - As NASA celebrates the 50th anniversary of the Apollo landing on the moon, it added drones and rovers to its annual student launch competition.

Nearly three dozen student teams from colleges, universities, high schools and some middle schools from around the country flocked to Huntsville, Ala., the location of the Marshall Space Flight Center, so their rockets could take flight. The gathering during the first weekend of April was the culmination of a months-long process of designing, analyzing, building and testing rockets to live up to NASA’s standard for a safe takeoff.

“It takes about 8 months,” Katie Wallace, NASA’s Student Launch Manager, said as she explained the rigorous process teams have to go through before they can even make it to the launch pad during the competition. “They have schematics. They have computer simulations to verify their predictions and then they have to go out in the field to test their predictions. It’s very detailed.”

The UMass Rocket Team from the University of Massachusetts Amherst was among the teams to qualify and make the long trek down to Huntsville. The team of 14 had a good idea of how difficult it was just to make it to that point because they almost didn’t. The Rocket Team’s rocket went ballistic during a test launch in Vermont - days before the team was to report back to NASA to show that they had a successful full-scale rocket launch in February.

“The entire rocket crashed into the ground at around 520 miles an hour,” explained Amelia Bruno, co-team lead of the UMass Rocket Team. “The rocket was completely destroyed.”

One of the rocket’s parachutes had failed to deploy properly, which made it nearly impossible for the rocket to slowdown once its secondary parachute deployed about 500 ft. above the ground.

With a week left for UMass to get a successful report back to NASA to qualify for Student Launch, the Rocket Team decided it wasn’t going to give up on months of work and fundraising because of one major setback.

“It was a very emotional day,” Bruno said as she recalls watching three weeks of construction smash to smithereens when it hit a bed of ice. “It was a pretty big shock, but almost immediately we knew we needed to stay in this competition. So we turned around and said ‘OK, we’ll need to order a new airframe. We can overnight that from California before we get home. We need to order a new nose cone. We need to find new altimeters to record our flight data.’”

Within 24 hours, the team had dropped an additional $1,600 out of its $10,000 budget on the necessary parts for a new rocket they were going to attempt to build in less than a week’s time.

The rocket failure happened on a Sunday and by Wednesday the team was constructing a new one. Team members worked around the clock.

“We built the rocket in three days and successfully flew it,” Bruno said. “We crashed our rocket on Sunday and launched our brand new rocket that next Saturday to remain in this competition.”

By launch day, Ted Cochron, former president of the National Association of Rocketry, said he was amazed with what he was seeing from all the teams in attendance, particularly the speed at which the teams are developing and building full-scale rockets.

“They’re doing things that, when I was in college, we would have done in our second or third year,” he said. “They’re doing it basically in one year. Inventing things practically from scratch.”

As the UMass Rocket Team prepared its rocket for liftoff, the team had to troubleshoot some overheating issues with its payload system that was tasked with releasing the Rocket Team’s 3-D printed drone prior to it flying to a NASA specified landing pad. But after all the team had been through leading up to launch day, that seemed like a small fix.

Not long after, the team’s new rocket was set up on the launch pad. The countdown was winding down.

Without hesitation, the team’s rocket took off a few thousand feet into the sky, before finally coming back down for a delicate landing this time around. Much to the delight of UMass.

“It went well,” Bruno said with a big smile on her face. “It didn’t go ballistic.”

All the successes and failures of the day could certainly turn out to be a help for NASA as the agency forges ahead with orders from the Trump Administration to put an American on the moon by 2024.

“This gives us some basic research,” Wallace said. “We get to see some innovation and creativity that might help us at NASA.”