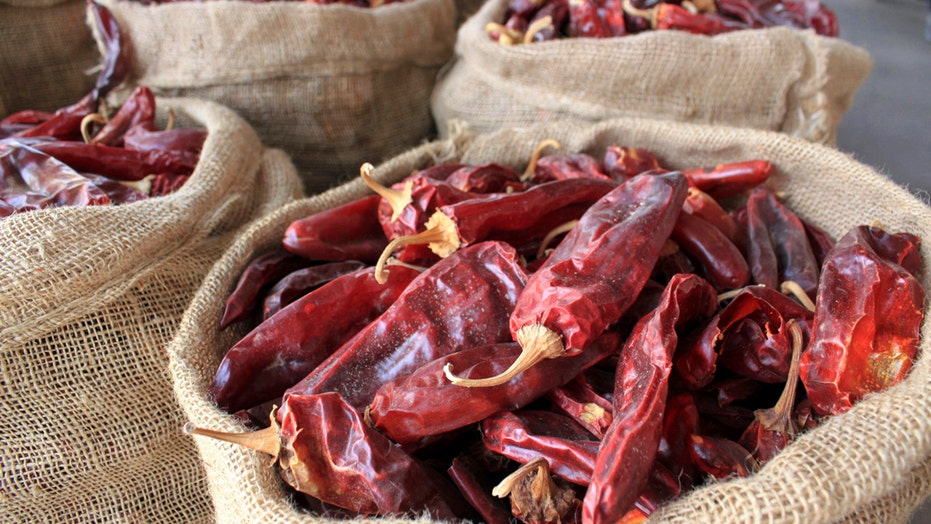 Even your snooty neighbor will be jealous of this fruit and vegetable garden.

NASA is looking to grow a hybrid version of a New Mexico chile plant in space on the International Space Station as part of an experiment, starting in March 2020.

A NASA group testing how to produce food beyond the Earth's atmosphere and the chile plant was created with input from Jacob Torres — an Española, N.M. native and NASA researcher.

FILE - In this Aug. 9, 2017, file photo, Chris Duran Jr, 7 helps roast green chile with his family outside the Big Lots in Santa Fe, N.M. A hybrid version of a New Mexico chile plant has been selected to be grown in space as part of a NASA experiment, officials recently announced. (Gabriela Campos/Santa Fe New Mexican via AP, File)

NASA REVEALS ITS VISION FOR A RETURN TO THE MOON

The point of sending the chiles into space, according to Torres, is to demonstrate how NASA's Advanced Plant Habitat - which recreates environmental needs for plant growth like CO2, humidity and lighting - works not only for leafy greens, but for fruiting crops, as well.

"Understanding how to grow plants to supplement the astronaut's diet would be essential to our mission to going to Mars," Torres told the Associated Press. "So that kind of fuels our research that we're doing now."

Although they are often in the vegetable section in the supermarket, peppers are actually considered fruits by botanists, which would make the New Mexico chile plant the first fruit ever grown in space by NASA.

Previously, astronauts have grown greens and a zinnia bloomed in space in 2016.

In an interview with the Rio Grande Sun, NASA Plant Physiologist Ray Wheeler said the space agency was looking for a specific type of plant that could work with the tight parameters of the ISS.

“We were also looking for varieties that don’t grow too tall, and yet are very productive in the controlled environments that we would be using in space,” Wheeler told the news outlet.

FILE - This March 20, 2013, file photo, shows sacks of dried red chile pods at the Hatch Chile Sales shop along the main street of the self-proclaimed "Chile Capital of the World," in Hatch, N.M. A hybrid version of a New Mexico chile plant has been selected to be grown in space as part of a NASA experiment, officials recently announced. (AP Photo/Susan Montoya Bryan, File)

The "Española Improved" chile plant is a cross between a northern New Mexico seed and the popular Sandia seed from the Hatch Valley.

Torres added that the chiles could boost the astronaut's morale, giving them something to eat that's different than the pre-packaged meals astronauts are used to eating.

"Just by having something fresh to eat, a type of crop you grew yourself, being away from home for a long time, that picks up your morale, it brings positivity and adds to the mission that you're doing," he told the AP. "That's one important aspect of the research that we're doing."