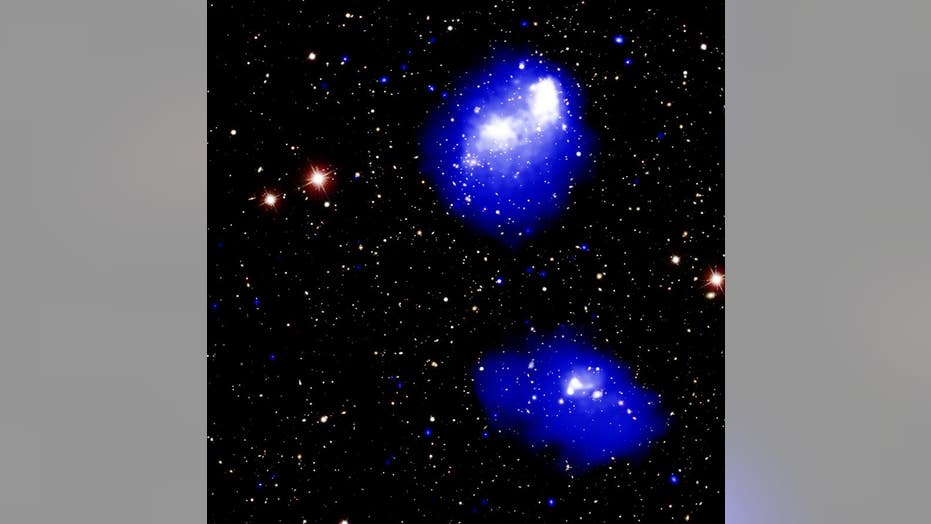 A rare collision between four galaxy clusters can be seen in a stunning new image from NASA's Chandra X-ray Observatory.

The space agency says that eventually all four clusters, each of which has a mass at least several hundred trillion times that of the sun, will merge to form one of the most massive objects in the universe.

Galaxy cluster are large structures in the cosmos held together by gravity. Each cluster can contain hundreds or thousands of galaxies, along with a large amount of mysterious and invisible dark matter.

GIANT 'THUNDER LIZARD' DINOSAURS MAY HAVE WALKED ON THEIR FRONT FEET ONLY, FINDINGS REVEAL

This new observation shows a mega-structure being assembled about 3 billion light-years away from Earth in a system called Abell 1758.

"Each pair in the system contains two galaxy clusters that are well on their way to merging. In the northern (top) pair seen in the composite image, the centers of each cluster have already passed by each other once, about 300 to 400 million years ago, and will eventually swing back around," NASA explains in a statement accompanying the image.

"The southern pair at the bottom of the image has two clusters that are close to approaching each other for the first time," the space agency states.