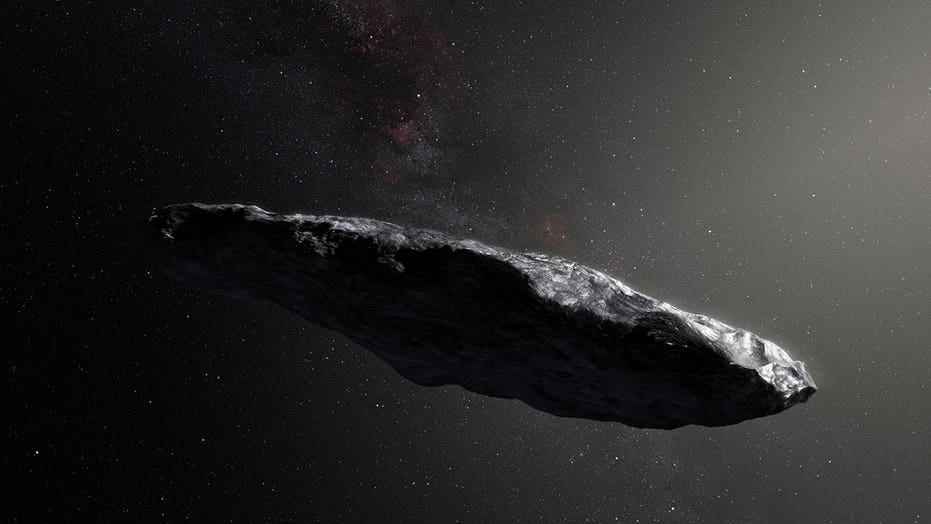 More than two years after it was discovered, the mysterious interstellar object 'Oumuamua is getting a new origin story.

According to a study published in Nature, 'Oumuamua – which means "pathfinder" or "scout" in Hawaiian – could have been ripped from a larger object due to gravity from a nearby star.

“We showed that ‘Oumuamua-like interstellar objects can be produced through extensive tidal fragmentation during close encounters of their parent bodies with their host stars, and then ejected into interstellar space,” said study co-author Douglas Lin in a statement.

Artist's illustration of Oumuamua, the first interstellar object ever spotted in our solar system. (M. Kornmesser/ESO)

Lin, along with the other researchers, used computer simulations to show how objects like 'Oumuamua "can form under the influence of tidal forces like those felt by Earth’s oceans," according to the statement.

The cigar-shaped 'Oumuamua, which was first discovered in October 2017, is unlike anything researchers had ever seen before, due to its shape, as well as dry surface. This led to some researchers believing it could be an alien probe, but that is likely not the case, the study's lead author, Yun Zhang added.

“It is really a mysterious object, but some signs, like its colors and the absence of radio emission, point to ‘Oumuamua being a natural object,” Zhang explained.

A study published in November 2018 from the Harvard Smithsonian Center for Astrophysics suggested it could be "a lightsail of artificial origin" sent from another civilization.

The researcher who discovered 'Oumuamua, Canadian physicist and astronomer Robert Weryk, said the idea it was from another civilization was just "wild speculation."

“The discovery of 'Oumuamua implies that the population of rocky interstellar objects is much larger than we previously thought,” Zhang explained. “On average, each planetary system should eject in total about a hundred trillion objects like 'Oumuamua. We need to construct a very common scenario to produce this kind of object.”

U.S. Naval Academy astronomer Matthew Knight, who was not involved in the study but co-leads the ‘Oumuamua International Space Science Institute team, said the study “does a remarkable job of explaining a variety of unusual properties of ‘Oumuamua with a single, coherent model.”

No longer observable by telescopes as of January 2018, many have speculated what 'Ouamumua is. In addition to the light sail theory, some have theorized that it is a comet or an asteroid.

The mystery about its exact nature deepened in late 2018, when NASA said it had been looking in 'Ouamumua's direction for two months but did not originally see it.