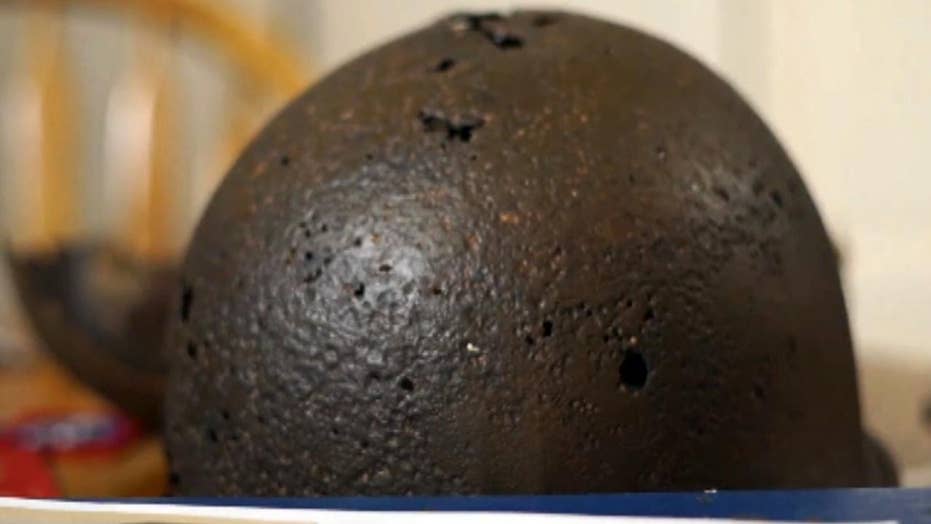 Man discovered it in Holland

The helmet, which belonged to her late father, a soldier in the 82nd Airborne Division, was discovered by a local man using a metal detector.

Fox 9 reports that Lawrence Frenning’s name was written carefully in white paint inside the helmet liner, leading to the helmet’s eventual return to his family in the U.S.

“It’s a piece of my dad, it means a lot,” his daughter Lynnell Frenning-Wallace, told Fox 9. Her father survived the war, but died of cancer in the 1970s. “We didn’t learn much then, so that’s why I’ve been trying to retrace his footsteps now,” added Frenning-Wallace, who lives in Wyoming, Minnesota.

Lawrence fought in six campaigns during World War II, including Operation Market Garden, a massive attack on German forces in Holland in 1944.

Seventy years later Lawrence’s helmet was unearthed in an old foxhole by Felix de Klein, who has discovered a slew of relics from the Market Garden battlefield. De Klein works to return the items to the soldiers as a thank you for liberating his country from the Nazis, according to Fox 9.

“This lady from Holland contacted me through Facebook Messenger and said her father was looking with a metal detector in the area of Market Garden in Holland and he found my dad’s helmet from World War 2,” said Frenning-Wallace. “I said I would pay the postage on it and he said, ‘absolutely not, I will send it free of charge’.”

“It means the world to me, to get a piece of my dad and keep his memory alive,” she added.

In 2010 de Klein returned a dog tag he found on the Market Garden battlefield to the family of a late U.S. Army veteran in St. Petersburg, Florida, the Tampa Bay Times reports.