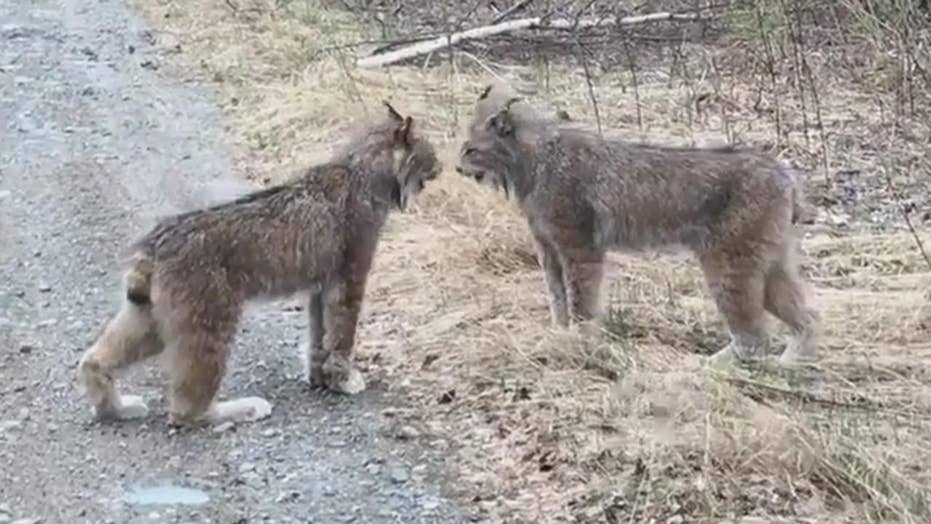 WILD video: Watch lynxes scream at each other

A mysterious feline spotted a few weeks ago in Michigan has finally been captured.

The big cat, which was confirmed to be a rare Canada lynx, was trapped by wildlife officials on Sunday after it was seen "munching" on a Huron County man's domesticated birds, including geese and ducks.

Joe McCoy couldn't believe the lynx made its home in his backyard. And unfortunately, some of his animals paid the price.

"Out of the whole state of Michigan, just right out in my backyard," the shocked man told WNEM this week. "This is not a habitat for those kinds of animals. They're around killing stuff, somebody's gonna shoot one. Or they get hit on the road."

Trapper Jordan Cook, who's employed by McCoy, helped put a safe end to the creature's havoc, the news station reports. He set up a contraption that held the large cat's paw — without harming it — and then called the Michigan Department of Natural Resources (DNR) to remove the live animal from the property.

"Out of the whole state of Michigan, just right out in my backyard."

Dan Kennedy, Michigan DNR endangered species coordinator, said it's unclear if the wild cat was domesticated in some way.

"It seemed to be very bold," he told the Times Herald, adding that there's still more research that needs to be done.

The cat is currently resting at the Howell Nature Center in Michigan, where it will be provided around-the-clock care until it's transferred to the Detroit Zoological Society for further assessments.

"It is not yet clear if the lynx is a released/escaped illegal pet or is in fact, truly wild. After the evaluation, a determination by the DNR will be made if it can be released back to the wild," the nature center explained in an online statement on Tuesday.

The lynx was last seen in nearby Lexington in February. Monique Touchette-Soper's son Hunter caught a six-second video of the big cat and flagged the footage to officials.

An average lynx grows between 2.5 to 4 feet long and has paws that measure roughly 3.7 inches wide and 4.5 inches long, Michigan State University's Natural Features Inventory states on its website, noting the creature is listed as endangered in the state.

According to the school, there have only been three documented lynx sightings since 2003 — with the most recent recorded in Chippewa County in 2010.

Bobcats often get mistaken for lynx, but there are distinct differences between the two.

"Lynx tail tip is all black and bobcats have black on the top and white on the bottom of the tail tip. Lynx have longer back legs, giving them a stooped appearance. Bobcat ear tufts are usually shorter than an inch, but lynx tufts are often longer than an inch. Lynx have larger paws that act like snowshoes to hunt prey in deep snow," the Michigan DNR described in a previous post online.