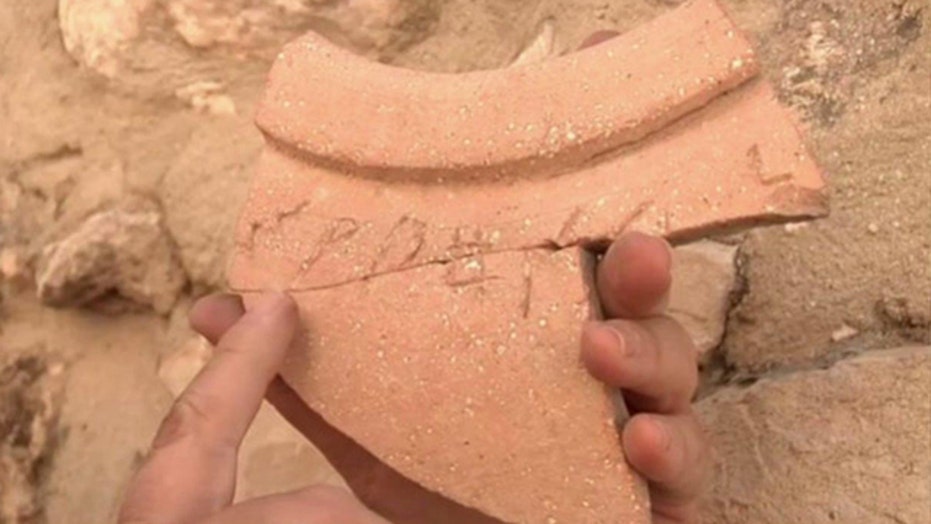 Inscription on jug dated back to King David

A few characters on the side of a 3,000-year-old earthenware jug dating back to the time of King David have stumped archaeologists until now -- and a fresh translation may have profound ramifications for our understanding of the Bible.

Experts had suspected the fragmentary inscription was written in the language of the Canaanites, a biblical people who lived in the present-day Israel. Not so, says one expert who claims to have cracked the code: The mysterious language is actually the oldest form of written Hebrew, placing the ancient Israelites in Jerusalem earlier than previously believed.

"Hebrew speakers were controlling Jerusalem in the 10th century, which biblical chronology points to as the time of David and Solomon," ancient Near Eastern history and biblical studies expert Douglas Petrovich told FoxNews.com.

"Whoever they were, they were writing in Hebrew like they owned the place," he said.

"It is just the climate among scholars that they want to attribute as little as possible to the ancient Israelites."

First discovered near the Temple Mount in Jerusalem last year, the 10th century B.C. fragment has been labeled the Ophel Inscription. It likely bears the name of the jug's owners and its contents.

If Petrovich's analysis proves true, it would be evidence of the accuracy of Old Testament tales. If Hebrew as a written language existed in the 10th century, as he says, the ancient Israelites were recording their history in real time as opposed to writing it down several hundred years later. That would make the Old Testament an historical account of real-life events.

According to Petrovich, archaeologists are unwilling to call it Hebrew to avoid conflict.

"It's just the climate among scholars that they want to attribute as little as possible to the ancient Israelites," he said.

Needless to say, his claims are stirring up controversy among those who do not like to mix the hard facts of archaeology -- dirt, stone and bone -- with stories from the Bible.

Tel Aviv University archaeologist Israel Finkelstein told FoxNews.com that the Ophel Inscription is critical to the early history of Israel. But romantic notions of the Bible shouldn't cloud scientific methods -- a message he pushed in 2008 when a similar inscription was found at a site many now call one of King David's palaces.

At the time, he warned the Associated Press against the "revival in the belief that what's written in the Bible is accurate like a newspaper."

Today, he told FoxNews.com that the Ophel Inscription speaks to "the expansion of Jerusalem from the Temple Mount, and shows us the growth of Jerusalem and the complexity of the city during that time." But the Bible? Maybe, maybe not.

Professor Aren Maeir of Bar Ilan University agrees that some archaeologists are simply relying too heavily on the Bible itself as a source of evidence.

"[Can we] raise arguments about the kingdom of David and Solomon? That seems to me a grandiose upgrade," he told Haaretz recently.

In the past decade, there has been a renaissance in Israel of archaeologists looking for historical evidence of biblical stories. FoxNews.com has reported on several excavations this year claiming to prove a variety of stories from the Bible.

Most recently, a team lead by archaeologist Yossi Garfinkel wrapped up a ten-year excavation of the possible palace of King David, overlooking the valley where the Hebrew king victoriously smote the giant Goliath.

Garfinkel has another explanation as to the meaning behind the Ophel Inscription.

"I think it's like a [cellphone] text," Garfinkel told FoxNews.com. "If someone takes a text from us 3,000 years from now, he will not be able to understand it."

The writing on the fragmented jug is a type of shorthand farmers of the 10th century used, in his opinion, and not an official way of communication that was passed on.

"What's more important is that there is a revolution in this type of inscription being found," Garfinkel told FoxNews.com. There have been several from the same time period found across Israel in the past five years.

"When we find more and more of these inscriptions, maybe not until the next generation, we may have a breakthrough," he said.