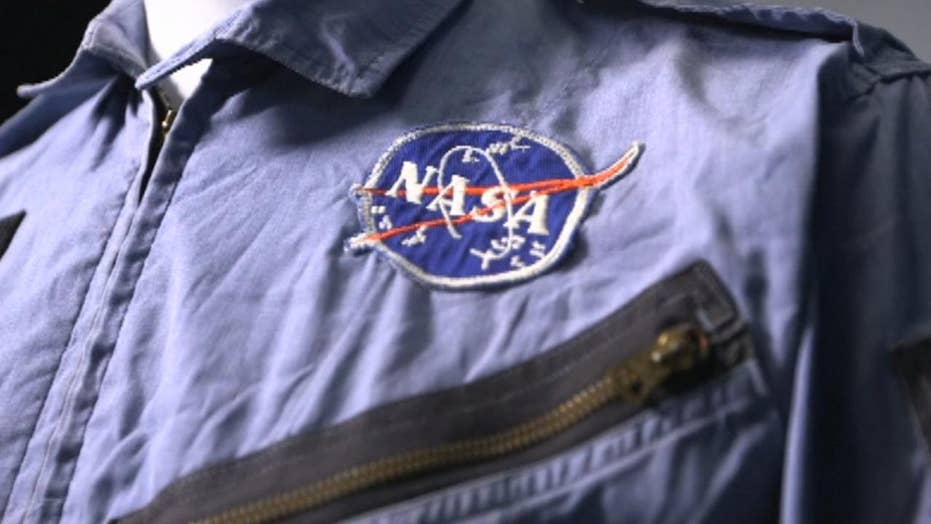 Space and history buffs have the opportunity to take home a range of memorabilia once owned by the first man to walk on the moon as bidding for nearly 2,000 of legendary astronaut Neil Armstrong's personal belongings begins at Heritage Auctions in Dallas.

COLUMBUS, Ohio (AP) — As the sons of a legendary astronaut, Matt Carpenter says he and his little brother "were blessed to grow up around some pretty interesting stuff."

That included the extraordinary headgear the boys would wear during youthful afternoons spent pretending to be fighter pilots.

"When we were young, as far back as I can remember, we would play naval aviators on the couch, and either my brother or I would wear the gold Glenn Navy helmet and one of us would wear a helmet that belonged to my father," Carpenter said.

This undated photo provided by Heritage Auctions shows a helmet worn by John Glenn during the history-making flight, dubbed Project Bullet, in which the future astronaut set the transcontinental speed record in 1957. Artifacts owned by the late Neil Armstrong will be offered for sale by Dallas-based Heritage Auctions starting Thursday, Nov. 1, 2018, including pieces of a wing and propeller from the 1903 Wright Flyer the astronaut took with him to the moon in 1969. (Courtesy of Heritage Auctions via AP)

That's Glenn, as in John Glenn, the first American to orbit earth, and their father, Scott Carpenter. Both men were among the Mercury Seven, the group of astronauts that piloted America's first manned spaceflights in the 1960s.

Now, both astronauts are gone and Matt says the brothers want the public to get a chance at the golden helmet, which Glenn wore while setting the transcontinental speed record during 1957's "Project Bullet." He gave it to Carpenter, who was a good friend, as a gift.

The helmet will be offered at auction by Dallas-based Heritage Auctions on Friday, a kind of astronautical addendum to a larger, previously announced sale involving the personal collection of another famed astronaut, Neil Armstrong.

A series of auctions involving some 2,000 artifacts and mementos owned by Armstrong, the first person to walk on the moon, begins Thursday and runs through November 2019.

Among Armstrong's personal items are pieces of a wing and propeller from the 1903 Wright Flyer, the first successful heavier-than-air powered aircraft. Armstrong, who like Glenn and brothers Wilbur and Orville Wright was from Ohio, took the items with him to the moon.

As with the Glenn helmet, Armstrong's items landed in the lap of the next generation after the famed astronaut died in 2012. Carpenter died in 2013 and Glenn followed in 2016, at age 95, the last surviving Mercury Seven astronaut. An estate sale of his belongings took place in March.

When the Carpenters discovered Armstrong's sons had organized a sale of their famous father's memorabilia, Matt Carpenter said the helmet seemed like an ideal fit. An effort to auction it earlier this year had been unsuccessful.

Carpenter, now 40, and his brother Nick, who turns 39 this week, would like to use some of the proceeds to help underwrite a documentary they are producing about the Glenn-Carpenter friendship. Matt Carpenter said they interviewed both astronauts in 2012 and hope to release the film in 2019.

Its working title is the famous Glenn quote, "Zero-G and I feel fine."