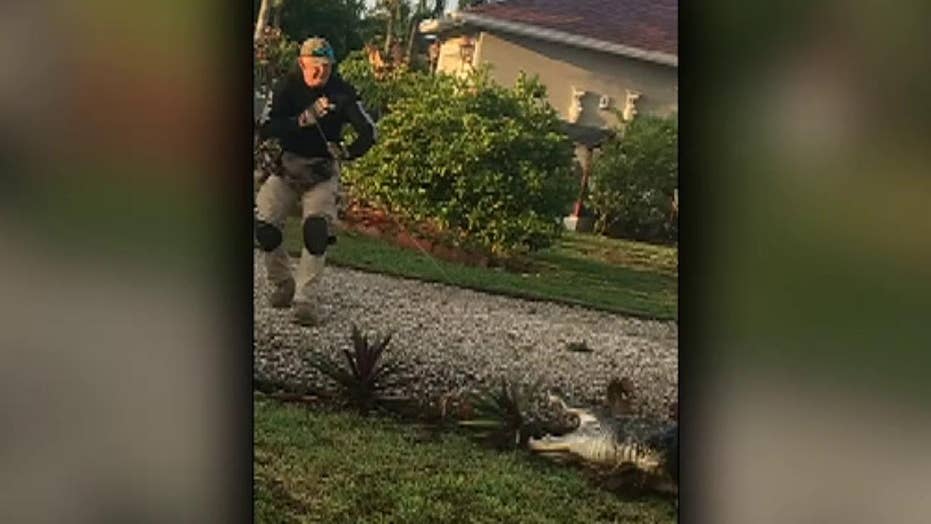 Officers from the Collier County Sheriff's Office were called out to deal with an alligator which was spotted right beside a school bus stop.

A “massive” alligator had to be removed from beside a children’s school bus stop in Florida Thursday morning.

Officials were called in around 6:30 a.m. ET to remove the 9-foot male alligator from the residential area in Collier County, Fla., near where children were waiting for their school bus, according to a Facebook post from the Collier County Sheriff’s Office.

“We got a call at about 6:30 a.m. today for a massive gator in a residential area of Golden Gate city. Kids were waiting nearby at their bus stop, but we're pretty sure this critter wasn't heading to school,” the sheriff’s post said, in part.

In a video of the capture, also posted on social media by the sheriff’s office, the gator can be heard hissing at the wranglers with its mouth wide open.

The huge reptile can be seen beside a house and as the wranglers try to pull it away, the gator rolls, trying to get out of the rope.

“Here's a better video of the gator doing his death roll this morning,” the video was captioned, in part.

“No one was injured during the wrestling match,” the post added, concluding: “Just another day in paradise, huh?”

In a video of the capture, also posted on social media by the sheriff’s office, the gator can be heard hissing at the wranglers with its mouth wide open. However, the sheriff's office said no one was injured during the incident.  (Collier County Sheriff's Office)

In an updated post with photos of the gator’s capture, the sheriff’s office made reference to a bobcat in Collier County that had climbed up and then down a power pole beside I-75.

“This prehistoric reptile is determined not to be upstaged by some cat on a power pole!” the sheriff’s office wrote.

According to the Florida Fish and Wildlife Conservation Commission (FWC), alligators begin courting in early April and mate in May or June.

Aside from roaming farther from their lagoons, warmer temperatures also revs up alligators’ metabolism, making them more active and aggressive as they hunt for prey and mate.

The FWC recommends not swimming during dusk or dawn — an alligator’s most active hours — keeping animals on a leash and away from water and keeping a safe distance if they come into contact with the large creature.