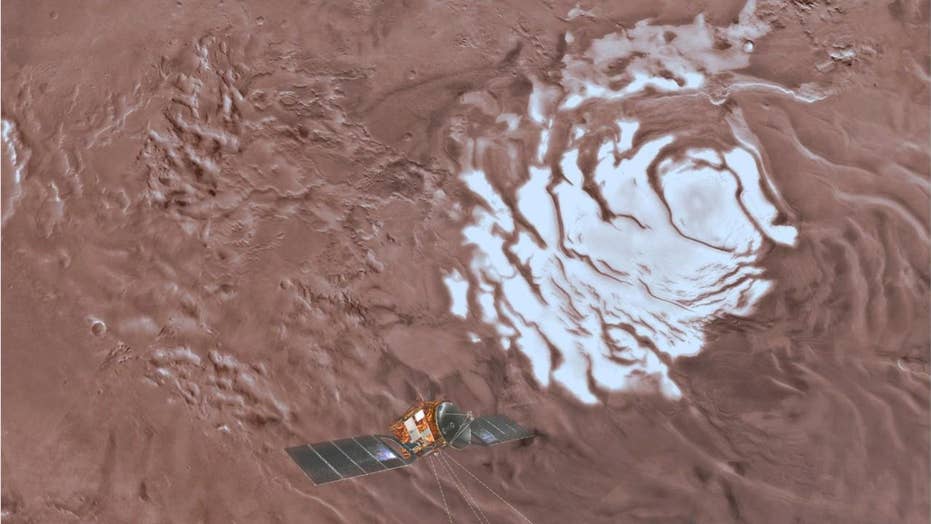 Researchers believe they have uncovered a persistent body of water beneath the south polar ice cap of Mars. What does this mean for life on the Red Planet?

Scientists have uncovered a "a stable body of liquid water" on Mars, in what some are calling a "game changer" in the search for alien life.

What is believed to be liquid water is sitting below Mars' southern polar ice cap and is described as a "well-defined, 20-kilometer-wide zone." 20 kilometers is roughly 12.5 miles.

The findings, which are published in the journal Science, were made possibly by Mars Advanced Radar for Subsurface and Ionosphere Sounding (MARSIS), an instrument that resides on the Mars Express spacecraft. MARSIS surveyed Mars' Planum Australe region between May 2012 and December 2015 and utilized radar pulses, sending them through the surface and the polar ice caps, ultimately measuring how the radio waves came back.

The pulses that came back created the aforementioned "well-defined, 20-kilometer-wide zone" and found that the radar reflected the brightness of the liquid water. The study's abstract notes that it is surrounded by "much less reflective areas," a sign that it is indeed water.

The team that wrote the study, including lead author Professor Roberto Orosei, have ruled out any other causes for the brightness.

Speaking with the BBC, Orosei said it probably isn't "a very large lake," but added that this is a body of water and not runoff from a glacier or something else.

"This really qualifies this as a body of water. A lake, not some kind of meltwater filling some space between rock and ice, as happens in certain glaciers on Earth," Orosei told the British media giant.

Following news of the findings, social media was understandably enthused, with some wondering what it might mean for the search for extraterrestrial life.

What does this mean?

The presence of liquid water at the bottom of the Martian polar ice caps was first theorized more than 30 years ago, the researchers said, but it had been "inconclusively debated ever since." With the stunning findings, that debate is likely to be put to bed.

The water is likely to be below the freezing point for water (32°F or 0°C) given its location beneath the ice cap, but the presence of minerals such as magnesium, calcium and sodium perchlorate in the soil of the northern plains of Mars, "support the presence of liquid water at the base of the polar deposits."

The presence of these minerals could help form a brine with the water, which would allow it to remain liquid, a reaction that already exists on Earth in areas like Antarctica.

MARS 'GHOST' DUNES MAY HAVE EVIDENCE OF ALIEN LIFE

Despite the obvious excitement surrounding the findings, Mars' surface is "inhospitable to life," according to the Open University's Dr. Manish Patel, and researchers are not any closer to finding life than they were prior to the announcement.

“This is just one small study area; it is an exciting prospect to think there could be more of these underground pockets of water elsewhere, yet to be discovered," Orosei said in a statement on the European Space Agency's website.

“This thrilling discovery is a highlight for planetary science and will contribute to our understanding of the evolution of Mars, the history of water on our neighbor planet and its habitability,” Titov said.

"While all the previous announcements have been extremely significant, the recent verification of a body of subsurface liquid water is particularly important," Chris Carberry, CEO of Explore Mars, a non-profit organization that aims to advance the goal of sending humans to Mars within the next two decades, told Fox News. "When you combine this discovery with recent confirmation of organics and other evidence - while it does not confirm the existence of microbial life on Mars - it greatly increases the chances that past or present life could exist on Mars."