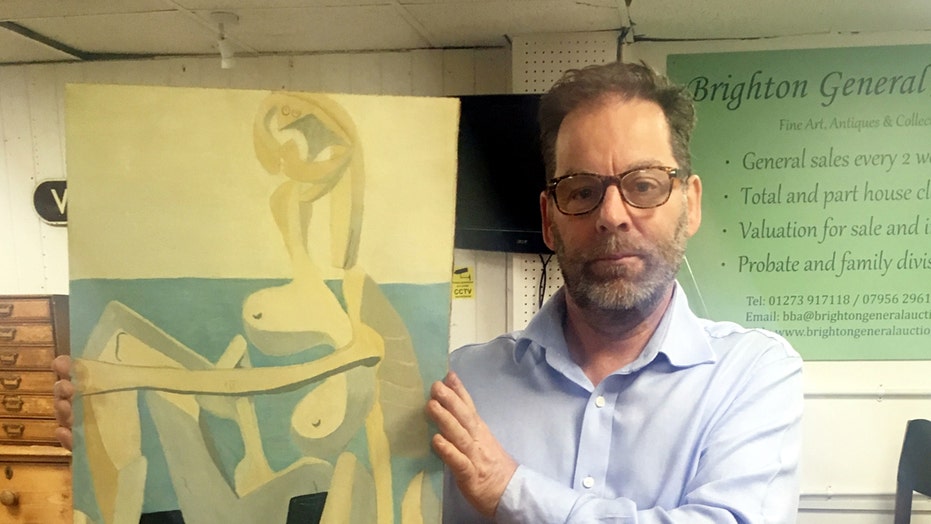 Philip Stapleton was perusing a thrift sale in the U.K. when he came across a painting he liked so much, he spent nearly $300 on it, even though he assumed it was fake. But after doing some research and talking to experts, the 52-year-old antique collector may have made the purchase of a lifetime – an original work by Pablo Picasso.

Stapleton said that he spent 230 British pounds ($293), even though he believed to be fake because he "loved the picture," SWNS reports. Acting on a whim, Stapleton took it Brighton and Hove Auction House, where he received the potentially good news.

“It is so exciting - one of our regular buyers came into the auction house with what he felt was a picture that had Picasso on it - he didn’t know that it was anything special," Brighton and Hove Auctions general manager Rosie May said in comments obtained by SWNS.

Initially, May was put off by the signature of the famed painter, who likely gave the portrait to a friend, Roland Penrose. After studying the painting intently and taking it out of the frame, she found a message with a "very clear" signature from Picasso, but one from earlier in his life.

Philip Stapleton, 52, originally regretted paying £230 for the artwork, worrying he’d been ripped off and left it on his desk for six months. (Credit: SWNS)

“The signature is clearly Picasso but with a message - you could try to work out what it says, it could be in Spanish, it could be in English, it could be in French we’re not sure, but very definitely there’s the name Roland and a date, but the date’s quite indistinct - we’d love to know what the message says," she continued.

As such, she now believes it's likely that the artwork is genuine.

“But because the signature on the front is one of his early signatures, it didn’t match with the painting of the Seated Bather. It sat by the desk for a while and just intrigued me so I looked at it more, picked it up, turned it over and on the back you can see very faintly Roland Penrose Estate."

May continued: “Further down is ‘collection P Picasso and just very faintly with a spyglass you can see it says Javier, and Javier Vilato was one of Picasso’s nephews that he was really close who also had a collection of Picassos, who also exhibited them.” She added that Picasso's friendship with Penrose started around the 1950s, "so we believe he probably gifted it to him and wrote the message on the back."

The chances are slim that it is a fake, as May believes there is "no way" that someone would copy Picasso's painting in that fashion, including the messages to Penrose, an unfinished foot and set in a slightly different canvas than the original one. “So for us, everything adds up."

The heralded Spanish painter, who is known for paintings such as "Guernica," "The Weeping Woman" and "Les Demoiselles d'Avignon," died in 1973 at the age of 91.

Stapleton said that he is “like a rabbit in headlights” when he heard the painting could be authentic. It's likely that the painting will be sold for at least $950,000 (750,000 British pounds), but paintings from Picasso in the past have sold for more than $130 million.

“That’s the exciting thing about what we do - you never know what you’re going to get through," Andrew Potter, the owner of Brighton and Hove Auction House, said in the interview. “So if this is the genuine article, it’s never been seen before and we’re talking life-changing sums of money for the owner. It’s an exciting time for us because we do this business to help people.”

The painting is set to go up for auction later this month.