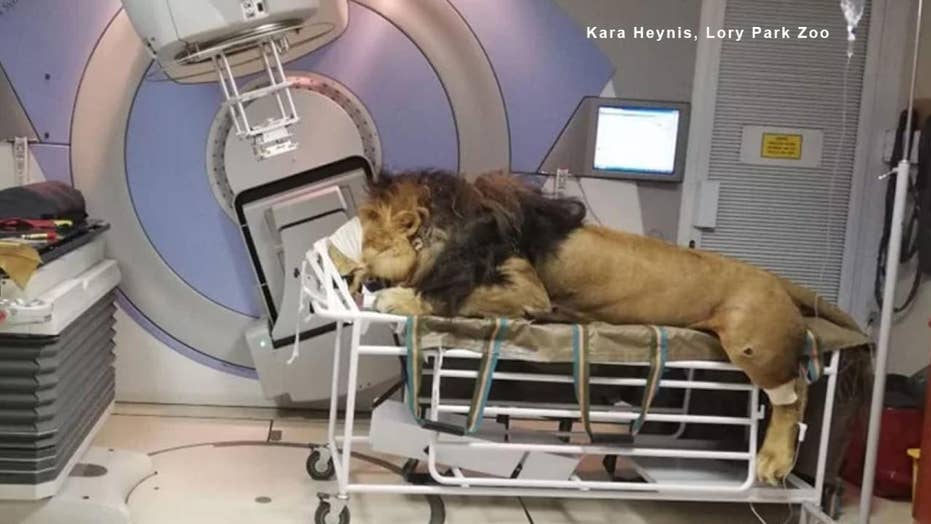 A lion in South Africa has become something of an internet sensation after the animal was photographed receiving treatment for cancer at a hospital in the city of Tshwane.

News 24 reports that the 16-year-old lion, named Chaos, was treated for skin cancer at the Muelmed Mediclinic on Tuesday.

Chaos was reportedly brought into the facility through a back door so as not to scare patients. (Kara Heynis, Lory Park Zoo)

Remarkable images show the sedated lion undergoing his first radiation treatment at the hospital. Chaos was reportedly brought into the facility through a back door so as not to scare patients. Chaos is owned by Kara Heynis of Lory Park Zoo, an animal and owl sanctuary in Midrand, South Africa.

The lion will undergo a total of four radiation treatments at the hospital, according to News 24. The Times reports that a lack of radiation facilities for animals in South Africa led to Chaos’s hospital visit.

Experts have been working to gain a better understanding of cancer in big cats. A research paper published in 2015, for example, studied disease in 38 big cats held in German zoos between 2004 and 2013. The group included 18 tigers, 8 leopards, 7 lions, 3 cheetahs and 2 cougars. Tumors were found in 50 percent of the animals, with 12 of the big cats showing more than one neoplasm, or abnormal tissue growth.

In 2012 a study that surveyed over 1,000 necropsied zoo mammals and found that 108 of the deaths were cancer-related, according to the Crown Ridge Tiger Sanctuary in Sainte Genevieve, Missouri. Mammary tumors were the most common form of cancer among the animals studied, accounting for 12 percent of the cases, the tiger sanctuary explains, on its website.

The lion will reportedly undergo a total of four radiation treatments at the hospital.

Lions are described as a 'vulnerable' species by the International Union for Conservation of Nature (IUCN) Red List, which says that the population of animals is decreasing. There are between 23,000 and 39,000 mature lions in the world today, according to IUCN data.