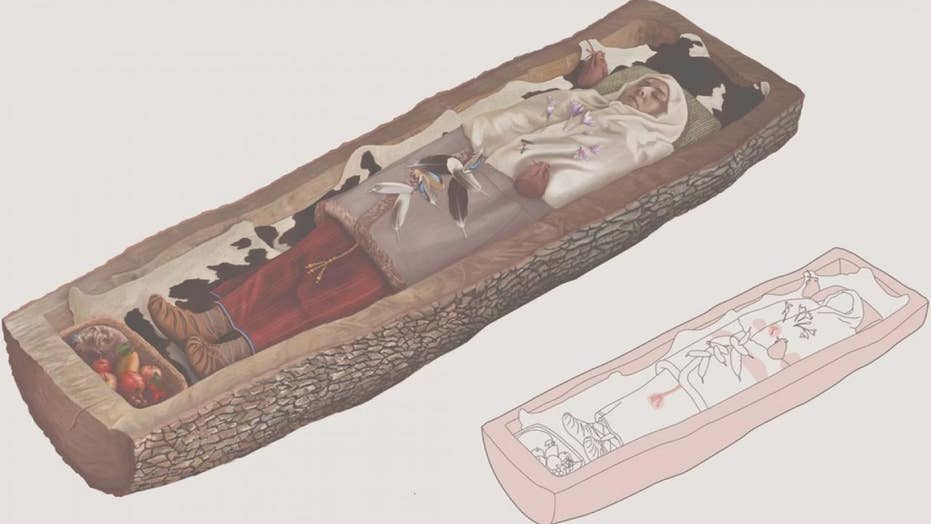 The grave of a Celtic female who was buried in approximately 200 B.C. has revealed a surprising find — she was buried in a tree coffin and adorned with precious jewelry.

According to a translated statement from the Office for Urban Development in Zurich, Switzerland, the woman was approximately 40 years old when she was buried and "draws a fairly accurate picture of the deceased."

This illustration shows what the woman's grave might have looked like in 200 B.C. Credit: Amt für Städtebau, Stadt Zürich (Office for Urban Development, City of Zurich)

"The examination of the skeleton and especially of the teeth shows, among other things, that she died at the age of about 40 years," had performed little physical labor during her lifetime and had likely eaten a lot of starchy or sweetened foods, according to the translated statement.

"A specialist determined the order of the layers of clothing on the basis of the textile, fur and leather scraps preserved in the grave," the statement continued. "So the woman wore probably a dress made of fine sheep's wool, about another woolen cloth and a coat of sheepskin."

The coffin, which still had bark on the exterior, was discovered in March 2017 during construction work on the Schulhaus Kern.

Although Celts who lived during the Iron Age are often thought of as living in the British Isles, they actually lived throughout Europe. Switzerland's Office for Urban Development found that the woman was likely a local to the area, using an isotope analysis of her bones.

Excavation of a Celtic grave at the Kernschulhaus 2017 (Credit: Office for Urban Development, City of Zurich)

The statement added that the Celtic woman may have known a Celtic man whose grave was discovered in 1903, as she was buried just 260 feet from him. The Celtic man's grave was adorned with a sword, shield and lance. "His full warrior outfit also identifies him as a higher-level personality," the release said.

Researchers are still unearthing secrets about the Celts. Earlier this year, researchers found more than 100 fragmented human skulls buried in an open area of Le Cailar, France– a 2,500 year–old town on the Rhone River.

The skulls, which were discovered among ancient weapons in the walled village, date back to the 3rd century B.C., when Le Cailar was a Celtic settlement. The skulls had cuts, indicating decapitation, as well as tongue and brain removal– signs that they may have been put on display until the area was covered in dirt around 200 BC.