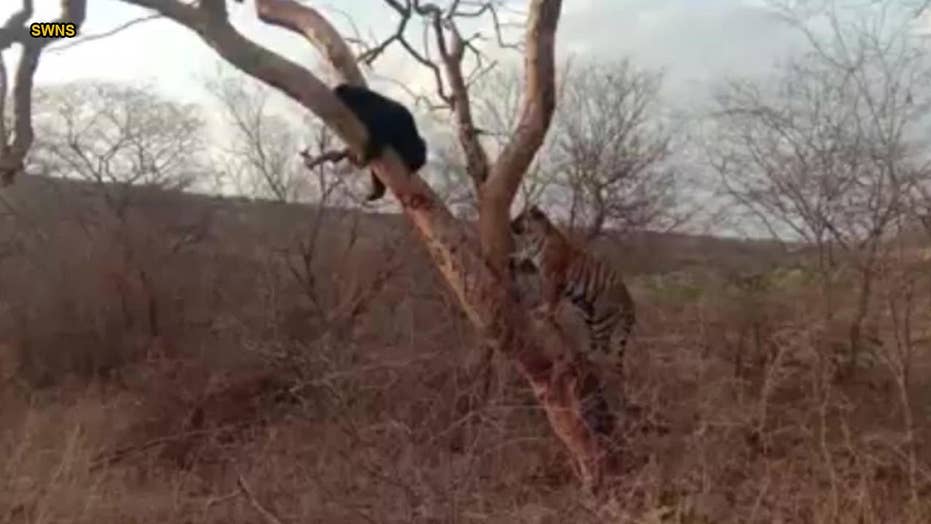 A quick-thinking bear avoided becoming a snack for a hungry tiger in India after it climbed a tree, surprising onlookers.

This bear is certainly smarter than your average bear.

A quick-thinking bear avoided becoming a snack for a hungry tiger in India after it climbed a tree, a move which surprised onlookers.

Tourists at Ranthambore National Park were riding around in a Jeep tour on June 16 when they spotted and filmed the incredible encounter, SWNS reports. The tiger chased the bear, which was able to nimbly navigate the tree, escaping almost certain death.

This is the moment a wild bear scared away a tiger that tried attacking it in the Ranthambore National Park in the Sawai Madhopur district of Rajasthan in India. The feline can be seen chasing the bear on the tree as it initially tries to escape and hangs from the tree. (Credit: SWNS)

After the bear settled near the far edge of the tree, where it was out of reach from the tiger, it let out a massive growl, which sent the feline fleeing.

It's unclear exactly what type of bear it is, but according to the Ranthambore National Park's website it may have been a sloth bear, which is native to the park.

Sloth bears are indigenous to the Indian subcontinent and are nocturnal, making the encounter between the tiger and the bear all the more exciting. Females can weigh between 120 and 270 pounds, while males can weigh upwards of 400 pounds.

Reaching up to 6 feet in length, sloth bears are known to be "excellent climbers" and subsist on a diet of termites and honey. In captivity, they can live up to 40 years, but in the wild, their life span is closer to 20 years, the website added.