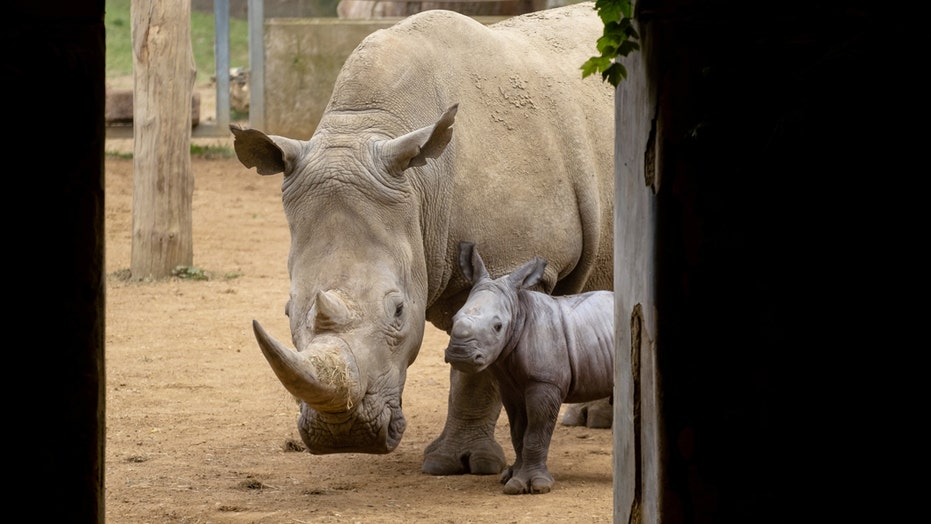 Remarkable images of a newly born rhinoceros and its mother have surfaced after the baby rhino was born earlier this month.

Stella, a female calf, was born to Ruby and Monty at the Cotswold Wildlife Park in Bradwell Grove, England, reports South West News Service (SWNS), a British news agency. Stella is the first female calf born to Ruby, who joined the wildlife preserve in 2009.

"We have had tremendous success with our current rhino herd," Jamie Craig, curator of Cotswold Wildlife Park, said in comments obtained by SWNS. "Stella is the sixth youngster from Nancy and Ruby and our bull, Monty, has proved to be an excellent dad."

New baby Rhino, Stella, who was born at Cotswold Wildlife Park, pictured with mom Ruby. She is the first female calf born to her parents and is healthy and nursing well. (Credit: SWNS)

Craig added that Monty is "the perfect combination of a dominant bull and caring patriarch."

Ruby joined the park along with another female rhino known as Nancy in hopes that one of them would mate with Monty and produce a calf, critical for the survival of the species.

Ruby joined the wildlife park in 2009, alongside another female Rhino called Nancy, in the hopes that they would produce the parks first ever Rhino calf with Monty. (Credit: SWNS)

The hope for Stella, the third female calf born at the park, is that as she grows older, she too can eventually become a mother.

In 2013, Nancy gave birth to a female named Astrid with Stella being the third female calf born at the park in its 49-year history. (Credit: SWNS)

"It is particularly satisfying that Ruby has produced a female calf – these are vital for the development of the breeding program and Stella will eventually move to another collection to hopefully become a successful mother herself," Craig stated.