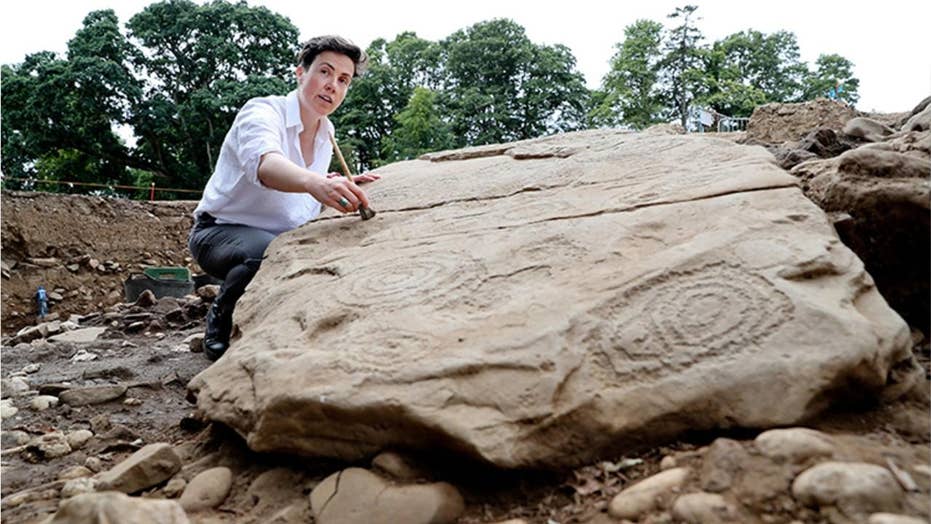 A new passage tomb cemetery has been discovered in County Meath, Ireland.

The passage tomb at Brú Na Bóinne, a World Heritage site in County Meath, was excavated by agri-technology Company Devenish and experts from University College Dublin’s School of Archaeology.

Brú na Bóinne, which is described as one of the world’s most important prehistoric landscapes, contains a number of tombs and monuments. The site’s tombs represent the largest assemblage of megalithic art in Western Europe, according to officials.

A large stone cairn was found above the newly discovered burial chambers. Another six kerbstones that followed the cairn perimeter have also been identified. One kerbstone has been decorated with Neolithic carvings and represents one of the most impressive discoveries of megalithic art in Ireland for decades, researchers say.

Kerbstones at the site. (UCD/Devenish)

“For the archaeologists involved in this discovery, it is truly the find of a lifetime,” said Dr. Clíodhna Ní Lionáin, Devenish’s lead archaeologist for the project, in a statement.

“This is the most significant megalithic find in Ireland in the last 50 years,” added Dr. Steve Davis of the UCD School of Archaeology.

Two possible satellite tombs have also been found during the latest excavation.

A kerbstone with elaborate carvings. (UCD/Devenish)

The discoveries at Brú Na Bóinne offer a fascinating glimpse into Ireland’s rich history. Earlier this year, the heart of an Irish saint was returned to the church it was stolen from in 2012. The 800-year-old religious relic, the heart of St. Laurence O'Toole, was returned to Christ Church Cathedral in Dublin. St. Laurence O'Toole is the patron saint of the Irish capital.