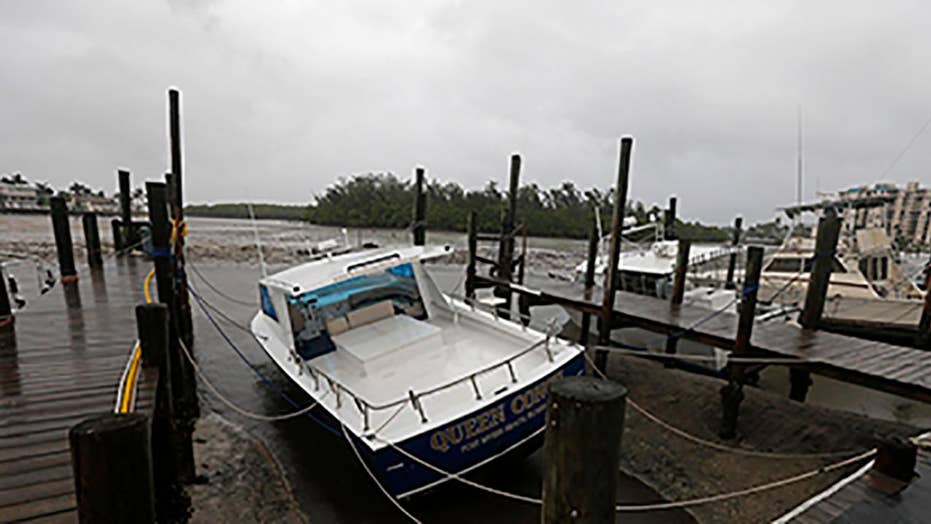 Fort Myers mayor: We are ready

With Hurricane Irma battering the west coast of Florida, experts are explaining the science behind the deadly storm.

The hurricane, which has left a trail of devastation across the Caribbean, made landfall as a Category 4 storm in the Florida Keys Sunday morning, before setting out on a path along Florida’s western coast.

Hurricane Irma is driving toward Florida passing the eastern end of Cuba in this NASA's GOES-16 satellite image taken at about 0800 EDT on September 8, 2017. Courtesy NOAA National Weather Service National Hurricane Center/Handout via REUTERS ATTENTION EDITORS - THIS IMAGE WAS PROVIDED BY A THIRD PARTY TPX IMAGES OF THE DAY - RC15ABBCAB90 (REUTERS)

Depending on where in the world they occur, hurricanes are also known as typhoons or cyclones. The scientific term for all these storms is a tropical cyclone, notes NASA. Hurricanes are tropical cyclones that form over the Atlantic Ocean and the eastern and central Pacific Ocean.

The Saffir-Simpson Hurricane scale is used to measure the storms – from Category 1 (74-95 mph) to the strongest, Category 5, with wind speeds of 157 mph and higher.

A major hurricane has maximum sustained winds of 111 mph or higher, which corresponds to a Category 3, 4, or 5, according to NOAA’s National Hurricane Center.

NASA compares tropical cyclones to “giant engines” that use warm, moist air as fuel. “That is why they form only over warm ocean waters near the equator,” it explains. “This warm, moist air rises and condenses to form clouds and storms.”

“As this warmer, moister air rises, there’s less air left near the Earth’s surface,” adds the space agency. “Essentially, as this warm air rises, this causes an area of lower air pressure below.”

This process starts the “engine” of the storm. To fill in the low pressure area, air from surrounding areas with higher air pressure pushes in. “That ‘new’ air near the Earth’s surface also gets heated by the warm ocean water so it also gets warmer and moister and then it rises,” explains NASA.

With the warm air rising, the surrounding air swirls to take its place. Fed by the ocean’s heat and water evaporation, the maelstrom of clouds and winds spins and becomes larger.

At the center of the swiftly rotating storm system, a calmer, low air pressure “eye” forms.

The winds and sea are whipped up off of the Rickenbacker Causeway in Miami as Hurricane Irma approaches on Saturday, Sept. 9, 2017. ( Mike Stocker/South Florida Sun-Sentinel via AP) (AP)

“Tropical cyclones usually weaken when they hit land, because they are no longer being ‘fed’ by the energy from the warm ocean waters,” notes NASA. “However, when they move inland, they can drop many inches of rain causing flooding as well as wind damage before they die out completely.”

Last month, for example, Hurricane Harvey dumped 50 inches of rain on parts of Texas and Louisiana.

Florida is particularly hurricane-prone as a result of its location. Hurricanes form between 5 and 30 degrees latitude north of the Equator and typically move toward the west. Additionally, Florida has been identified as a particularly storm-vulnerable area as a result of the state’s rapid growth in population. Florida has added 3.3 million people since the 2004 hurricane season, according to Stephen Strader, assistant professor of geography and the environment at Villanova University, in a note sent to Fox News.

The Atlantic hurricane season lasts from June 1 to November 30.