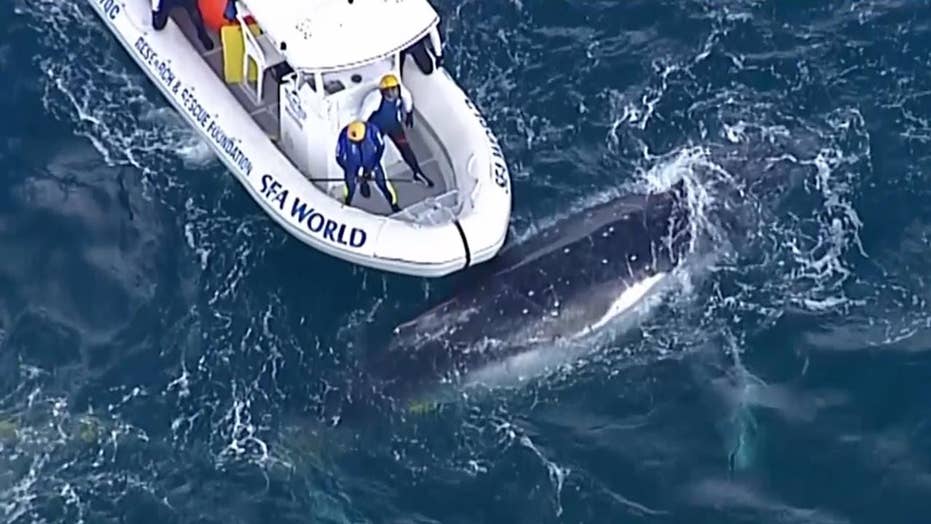 Raw video: Team cuts shark net off the back of a humpback whale, freeing the animal off the Gold Coast.

A humpback whale entangled in a shark net off the coast of Australia on Thursday was eventually cut free by a marine rescue team after an hours-long operation.

"The whale was breathing and in a calm state while it was being released and swam away strongly," Krause told the outlet. He reiterated that rescuing whales is “dangerous work” because of their size and strength.

It was unclear whether the whale was injured. A spokesman for the Queensland fisheries department said that any injury is likely superficial and the mammal would make a full recovery.

It was the first whale to become entangled off the Gold Coast during this year’s southern migration season. Last year, five whales were caught in nets in the Queensland region.

Meanwhile, a humpback whale off the coast of Massachusetts became ensnared in a rope on Monday. The whale had been traveling with 40 to 50 other humpbacks when it became trapped, the Center for Coastal Studies said in a news release.

It was discovered in poor condition and appeared to have been trapped for some time, officials said. Rescuers had difficulty cutting the rope but managed to free the mammal using a “slow, controlled approach” over two hours.

The rescues follow the deaths of a mother sperm whale and her baby after they became tangled in a fishing net last week in the Tyrrhenian Sea off Italy's western coast. It was believed the mother had died while trying to free its baby, Italian officials said.

Part of the net was found in the adult's mouth while the baby was completely covered by it. (Italian Coast Guard/Marevivo via AP)

"The death of these two giants of the sea is a loss for our natural heritage, but knowing that what happened is our fault makes it even more tragic," said Marevivo President Rosalba Giugni. "Changing our behavior is not enough. We need to change our beliefs in order to understand and to actually feel that when we harm the environment, we do it to ourselves."