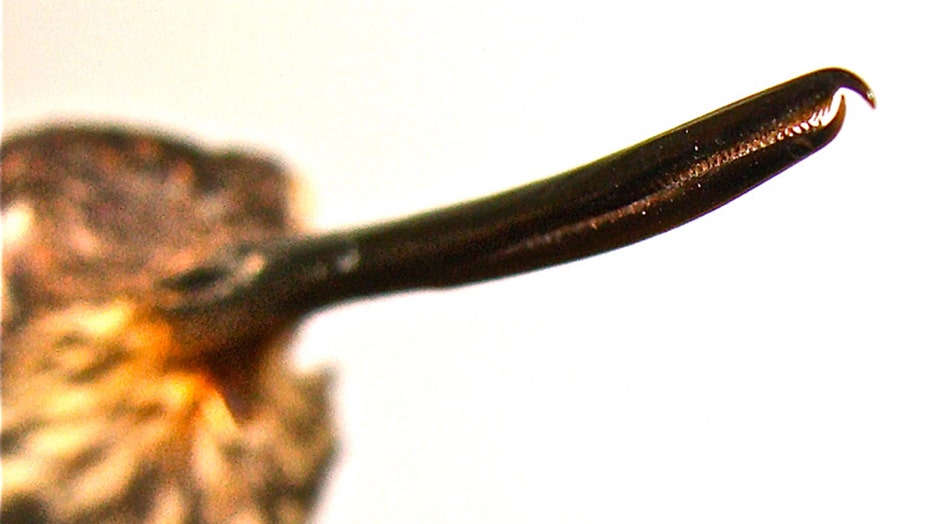 Hummingbirds are evolving ‘weaponized’ beaks with teeth for fighting

A new study has found that some hummingbirds in South America are developing straighter bills containing serrated teeth to fight other birds.

Hummingbirds are known as strong, aggressive and have even been labeled as "angry" by some researchers, but a certain species of the bellicose birds have taken their anger to a new level — they've started to develop "weaponized" beaks used for fighting and not eating.

Some male hummingbirds in South America, which can weigh as little as one-tenth of an ounce, have developed straighter bills containing serrated teeth to outduel rivals for the best spots to eat.

“We understand hummingbirds’ lives as being all about drinking efficiently from flowers, but then suddenly we see these weird morphologies – stiff bills, hooks and serrations like teeth – that  don’t make any sense in terms of nectar collection efficiency,” said Alejandro Rico-Guevara, a Miller Postdoctoral Fellow at UC Berkeley and the lead scientist on the project in a statement.

Rico-Guevara continued: “Looking at these bizarre bill tips, you would never expect that they’re from a hummingbird or that they would be useful to squeeze the tongue.”

Hummingbirds have long been known to be aggressive. In some cases, they've attacked larger birds, such as hawks or owls, but the speed at which they move has made tracking their aggressiveness exceptionally difficult. So Rico-Guevara and his team used a high-speed video camera and then slowed the footage down to see what was actually going on as the birds fended off rivals.

“Because it happens so fast and they fly away, you can’t track them,” he said. “But also, people haven’t actually looked at the details of the beaks. We are making connections between how feisty they are, the beak morphology behind that and what that implies for their competitiveness.”

The study is being published in the January 2019 issue of the scientific journal Integrative Organismal Biology.

The weaponized beaks are not adept for sipping nectar, Rico-Guevara said "fuels their lives,” further providing evidence that the evolutionary feature is likely due to help fend off the competition.

“We have discovered that these traits may be related to a different kind of strategy: instead of feeding on a particular flower shape very well, some birds try to exclude everybody from a patch of flowers, even though they can’t feed as well on them as hummingbirds without bill weapons,” Rico-Guevara said. “If you are good enough at keeping your competitors away, then it doesn’t matter how well you use the resources in the flowers you are defending, you have them all to yourself.”

WISDOM, THE WORLD'S OLDEST WILD BIRD, LAYS ANOTHER EGG AT 68

However, not all of the hummingbirds in the region use them to fend off competition for food. Some birds have used them to fight for the attention of females at gathering places known as leks, which Rico-Guevara described as like "a singles bar."