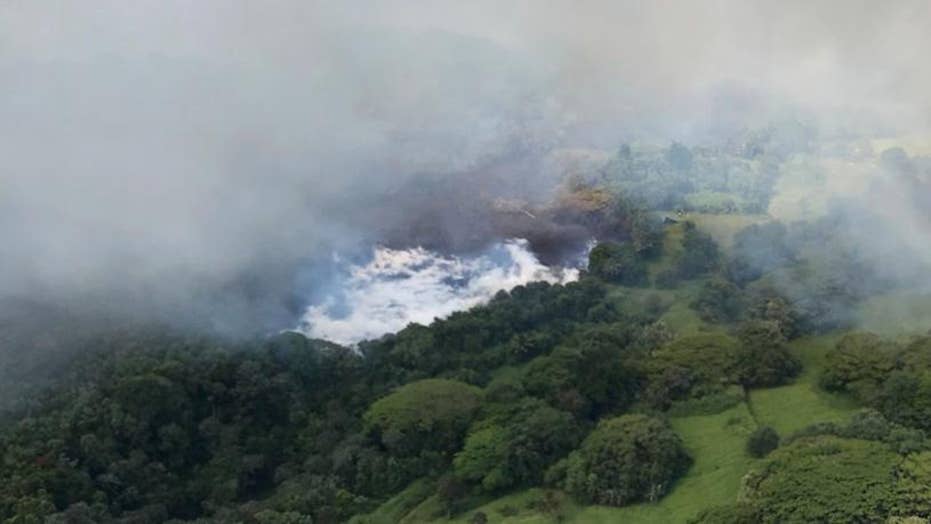 Hawaii's legendary freshwater Green Lake has been completely consumed by lava from the Kilauea volcano in only a matter of hours.

The ongoing eruption of Hawaii's Kilauea Volcano and continued lava flows into the sea has created a tiny new landmass off the Big Island, officials revealed Friday.

The U.S. Geological Survey said the tiny island formed off the northernmost part of the ocean entry from Fissure 8, and was oozing lava similar to that of the larger lava flow along the coast.

In photos posted by the agency, the "island" is just a few meters off shore, and about 20 to 30 feet in diameter.

A tiny new island of lava formed off Hawaii's Big Island on the northernmost part of the ocean entry of lava from Fissure 8. (USGS)

"It's most likely part of the fissure 8 flow that's entering the ocean—and possibly a submarine tumulus that built up underwater and emerged above sea level," the USGS said.

Officials said the new island was 20 to 30 feet in diameter. (USGS)

But anyone who may have wanted to visit the new landmass in its 'island' form is out of luck, as the agency revealed on Monday it's now connected back to the Big Island by a strip of lava.

"There didn't appear to have been any collapse associated with the island, so it may have been an inflationary feature. And yes, it's now no longer an 'island' thanks to the lava that's rejoined it with the flow front on land," the USGS said on Twitter in a reply to a question.

Kilauea began spewing lava on May 3. The volcano, one of the most active in the world, has already destroyed more than 600 homes and sent magma spewing out along fissures in the eastern Puna region of the island. The volcano's crater has also been subsiding. That has caused near-daily earthquakes, rock falls and subsequent explosions at the summit.

A laze plume rises where lava pours into the sea from fissure 8 on Hawaii's Big Island. (USGS)

As to what the new island would have been called, don't look to the federal agency to name it.

"The USGS doesn't name features formed in eruptions - that's something local communities get to do," the agency said.