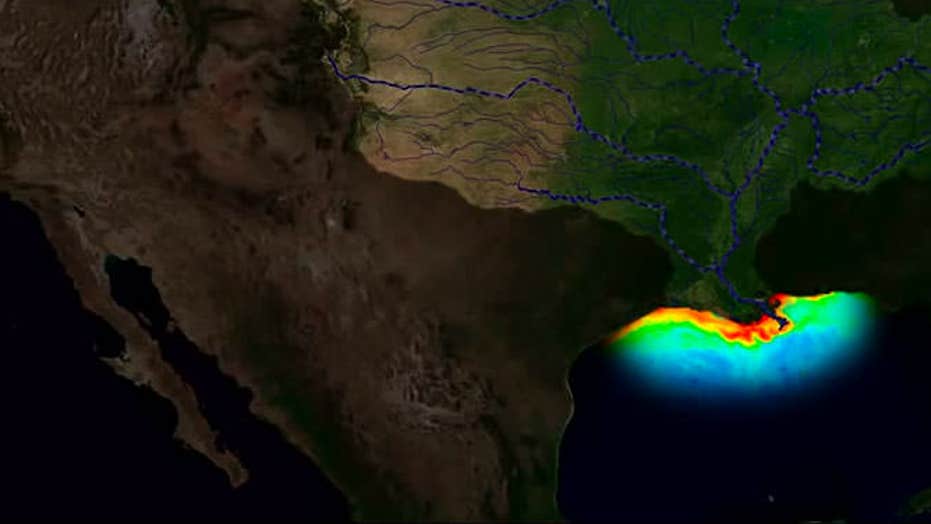 Scientists warn that the “dead zone” wreaking havoc on marine life in the Gulf of Mexico will cover almost 9,000 square miles this summer.

“A recent forecast of the size of the 'Dead Zone' in the northern Gulf of Mexico for late July 2019 reports that it will cover 8,717-square-miles of the bottom of the continental shelf off Louisiana and Texas,” explained researchers from Louisiana State Universit, in a statement. “The unusually high Mississippi River discharge in May controls the size of this zone, which will likely be the second largest zone since systematic measurements began in 1985.”

Nitrogen and phosphorous from the Mississippi River watershed fertilizes the Gulf’s surface waters to create large amounts of algal biomass, according to experts. When this plant material decomposes in the bottom layer of the Gulf, it results in carbon dioxide, which depletes the oxygen levels in the water.

LSU Department of Oceanography and Coastal Sciences Professor Nancy Rabalais dives an area in the Gulf of Mexico with low oxygen levels. In a research study, Rabalais and her co-author Gene Turner forecast that the Gulf of Mexico "dead zone" will be the second largest on record this year. (Cameron Thrash, LSU)

“Less oxygen dissolved in the water is often referred to as a ‘dead zone’ because most marine life either dies, or, if they are mobile such as fish, leave the area,” explains NOAA, on its website. “Habitats that would normally be teeming with life become, essentially, biological deserts.”

The Gulf of Mexico dead zone is the second largest in the world. A vast oxygen-depleted area in the Baltic Sea is the world’s largest, according to National Geographic.

A visualization of the "dead zone" in the northern Gulf of Mexico. (NOAA National Environmental Satellite, Data, and Information Service [NESDIS]))

The area covered by this summer’s dead zone in the Gulf of Mexico will be roughly the size of New Hampshire, LSU researchers predict. The area is also 4.5 times larger than the goal laid out in the Hypoxia Action Plan, which aims to control the problem of oxygen depletion in Gulf waters.