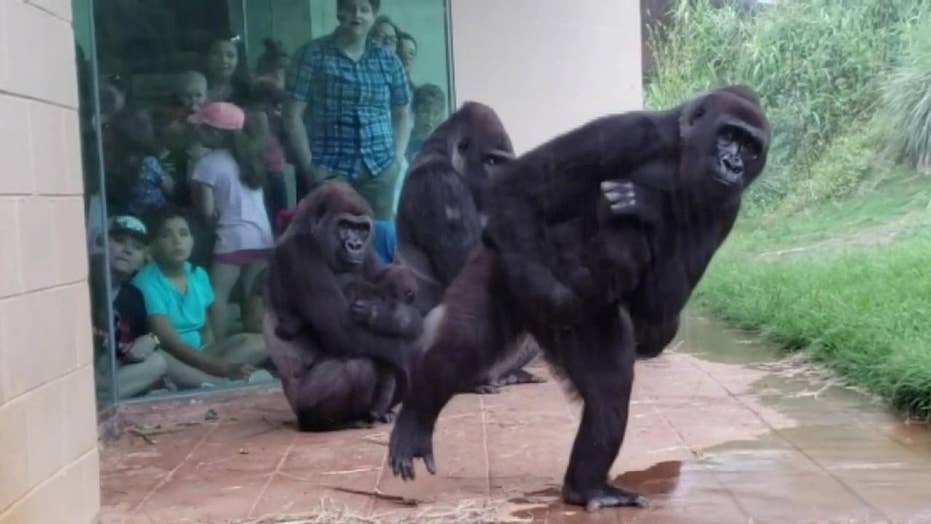 Raw video: Gorillas in a South Carolina zoo take shelter from the rain

The gorillas at Riverbanks Zoo and Garden in Columbia, South Carolina, take shelter under an overhang before running indoors to escape the rain.

A viral video from a South Carolina zoo showed a group of gorillas behaving just like humans as they tried to take shelter from the rain.

The primates at the Riverbanks Zoo and Garden in Columbia were seen huddling beneath an overhang. Each of two female gorillas clutched a baby in its arms as they all cautiously looked for an escape route to drier ground.

“Gorillas are magnificent, majestic creatures full of grace and beauty... except when it rains,” zookeeper Brooke Hunsinger captioned the video on Facebook.

“Gorillas are magnificent, majestic creatures full of grace and beauty... except when it rains.”

One brave gorilla, named Acacia, hugged the wall of the overhang in an effort to minimize wetness and shimmied around a corner out of the rain. As the three remaining grim-faced gorillas followed, each made a human-like face to show its revulsion to getting wet.

Some social media users suggested they send the gorillas umbrellas.

The male dominant silverback gorilla, Cenzoo, waited for the females, Macy and Kazi, and their babies, Mo and ZaKota, to make it to the dry area before leaving the overhang himself. The zoo replied that while there has been a hierarchy among the females, “all bets were off for dominance” in this situation because all the gorillas wanted to stay dry.

The video has been viewed nearly 8 million times since Hunsinger posted it on May 3.