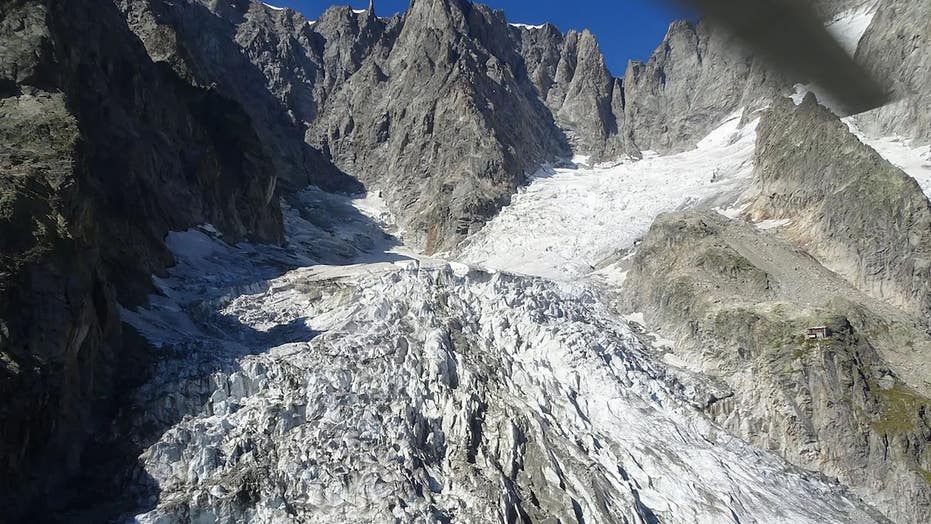 Scientists warned this week that a portion of the massive Mont Blanc glacier is in danger of collapse, prompting Italian authorities to close off roads and evacuate certain areas.

According to a statement from municipal officials, about 250,000 cubic meters of ice are in danger of breaking away from the Planpincieux glacier on the Grandes Jorasses peak, which is part of Western Europe's highest mountain range -- the Mont Blanc massif.

“This phenomenon once again testifies that the mountain is in a phase of strong change due to climatic factors, therefore it is particularly vulnerable,” Stefano Miserocchi, mayor of the town of Courmayeur, said in a statement.

Although scientists have been monitoring the glacier for six years, Miserocchi said the rate of melting has increased significantly recently.

The Planpincieux glacier on the Grandes Jorasses peak of the Mont Blanc massif. (AFP/Getty Images)

“The news that part of Mont Blanc risks collapsing is a warning that should not leave us indifferent. It must shake us all and force us to mobilize,” Conte said, The Guardian reported.

According to BBC News, the entire Mont Blanc massif has 11 peaks of about 4,000 meters in France and Italy, and attracts hundreds of thousands of tourists each year.

Scientists believe that a warming climate is contributing to the melt of glaciers worldwide. In addition, a heatwave across Europe over the summer is said to have influenced melt speed.

Last week, hundreds gathered for a funeral for the Pizol glacier in Switzerland's Glarus Alps. That glacier has lost up to 90 percent of its volume since 2006.