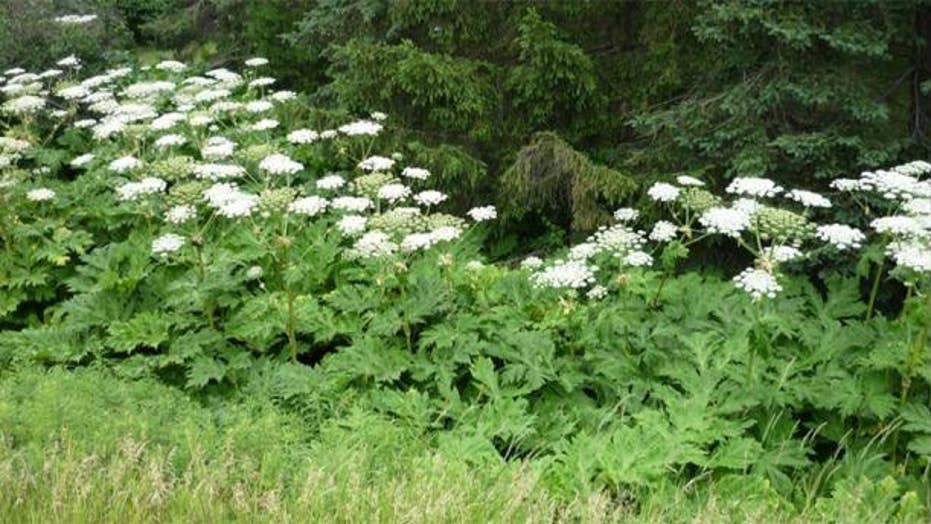 Warning: Toxic plant can cause 3rd-degree-burns and blindness

30 giant hogweed plants that can cause 3rd-degree burns and permanent blindness was discovered in Virginia.

Whether you’re hiking, gardening or just enjoying the outdoors, dangerous plants — such as giant hogweed and wild parsnip, among others — can be found in many different parts of the U.S.

Here’s what to know about different types of herbage that can produce serious burns or, in some cases, lead to blindness or death.

Giant hogweed can grow up to 14 feet tall and has green stems with purple splotches and white hairs. (iStock)

Not to be confused with cow parsnip, a giant hogweed plant can be identified by its white flowers, which are clustered into an umbrella shape, according to the New York Department of Environmental Conservation (DEC).

The plant, which can grow up to 14 feet tall, has green stems that have “extensive purple splotches and prominent coarse white hairs,” the conservation department says. Giant hogweed also has large, green leaves which are “deeply incised.” The leaves can reach lengths up to 5 feet wide. It is typically found across the U.S. in New England, in mid-Atlantic states and the Northwest.

Beware: Sap from giant hogweed can make skin more sensitive to the sun’s ultraviolet rays, which can lead to sunburn.

Painful blisters often form if proper action is not taken after sap touches a person’s bare skin. Injuries from the sap can take weeks, if not longer, to heal — and often leave scarring. The sap can also cause blindness if it gets into the eyes, the New York DEC warns.

If you come into contact with the plant, wash the affected area with soap and cold water, the department suggests, as heat and moisture can make it worse. Stay out of the sunlight and see a doctor if symptoms don’t improve.

Cow parsnip can be identified by its “white flat-topped flower clusters" and 2.5-foot-wide leaves. (iStock)

Though similar to giant hogweed, cow parsnip can be identified by the “white flat-topped flower clusters,” according to the New York Department of Conservation. Its leaves are less wide, typically only spanning to 2.5 feet.

Its stems also have white hairs, though they are more fine than those of the giant hogweed plant. Cow parsnip stems are green but do not have purple splotches.

Cow parsnip also has sap that can irritate the skin similar to giant hogweed, though it's less toxic.

The plant is “very cold-hardy, and is most abundant in the Pacific Northwest and Alaska, where it has a long history of use as a food and medicinal plant,” according to the New York DEC, which added that the plant is found mostly everywhere except for the south.

Wild parsnip plant can grow up to 5 feet tall and has a green-yellow stem. (iStock)

Wild parsnip is an invasive species that can cause serious burns and blisters, just like the giant hogweed plant. Both plants contain photosensitizing furanocoumarins, which make the skin more sensitive to the sun.

The wild parsnip plant can grow up to 5 feet tall and has a green-yellow stem. The wild parsnip doesn't have hair or bristles. Its leaves are “compound, pinnate, 5 to 15 toothed leaflets,” the New York DEC describes, adding the leaves are “variably lobed and yellowish-green.” It can be found throughout the U.S.

Its flowers — which are flat-topped, umbrella-shaped — are yellow, not white.

Poison hemlock can grow up to 12 feet tall and has small, white flowers in clusters. (Minnesota Department of Agriculture)

Found on roadsides, in pastures and ditches, poison hemlock is extremely toxic to both humans and animals, according to the Minnesota Department of Agriculture (MDA).

If ingested, poison hemlock can cause trembling, salivation, pupil dilation and a rapid, weak pulse before it “eventually leads to coma or death,” according to the MDA.

Poison hemlock can grow up to 12 feet tall and has small, white flowers which “occur in 4 to 8 inch umbrella shaped clusters,” according to the Washington State Noxious Weed Control Board (NWCB). Its stems are hollow and hairless. Similar to giant hogweed, poison hemlock stems also have purple blotches.

When handling this plant, the Washington State NWCB recommends wearing protective clothing and gloves. The plant is "naturalized in almost every state in the United States," according to the National Park Service.

Queen Anne’s lace is often confused for poison hemlock because both plants look similar. However, Queen Anne’s lace, is edible and is related to dill and cilantro, according to the Brooklyn Botanical Garden. The plant is also sometimes referred to as a wild carrot, and has been used as a contraceptive throughout history.

Queen Anne’s lace can be identified by its white flowers which often have a purple center. Its flower clusters are more spread apart, and the stems do not have any blotches.

Stinging nettle can grow up to 8 feet tall and has thin branches and dark green leaves. (iStock)

Stinging nettle is named appropriately, as its hollow, “stinging hairs” can deliver a painful sensation, similar to that of a bee sting, according to the New York DEC.

The end result is typically a “burning, itching or tingling” feeling for a few hours after coming in contact with the plant. While uncomfortable, the department notes that the stings from this plant is “more of an irritant than an allergic reaction.”

Stinging nettle can grow up to 8 feet tall and has thin branches and dark green leaves. It is mostly found in the eastern part of the country, but has been spotted in Ohio as well, according to Ohio State University.

“The leaves are opposite along the stem. Long clusters of tiny male or female flowers are produced at the base of each pair of leaves. They are usually light green or tan, and are apt to look rather messy and tangled,” according to the New York DEC.

Stinging nettle root and other parts of the plant can be used as a medicine, treating a variety of different types of ailments such as urinary tract infections, kidney stones, muscle aches, joint pain and more. It is edible if cooked.