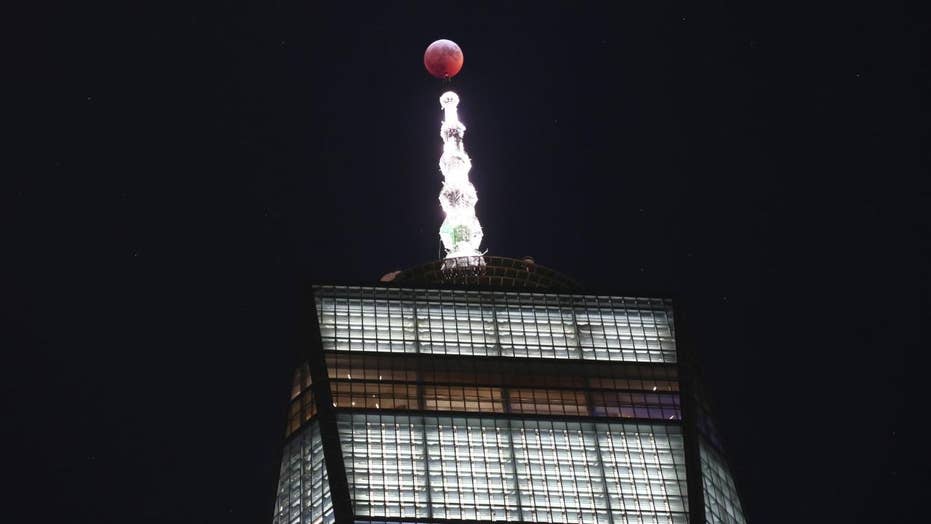 People from across the globe gazed in awe at 2019’s only total lunar eclipse that was called a super blood moon because of its huge size and reddish hue.

Skygazers are set for a treat this week when the third and final supermoon of the year occurs.

The Moon will turn full at 9:43 p.m. ET on March 20, according to EarthSky. This year the full moon occurs less than four hours after the March equinox, which marks the start of spring in the Northern Hemisphere.

March’s full moon was dubbed the ‘full worm moon’ by Native Americans because it occurs at a time of year when the ground is softening, and earthworm casts (worm manure) start to reappear, according to the Old Farmer’s Almanac.

File photo - A supermoon rises in front of a replica of the Statue of Liberty sitting atop the Liberty Building in downtown Buffalo, N.Y., Sunday, Dec. 3, 2017. (AP Photo/Julio Cortez)

This week’s celestial event is also a supermoon, which occurs when the Moon’s orbit brings it to the closest point to Earth while the Moon is full. The Moon will reach that point on March 19, when it will be 223,308 miles away.

“When a full moon appears at perigee [its closest point to Earth] it is slightly brighter and larger than a regular full moon—and that's where we get a ‘supermoon’,” explains NASA, on its website, noting that the phrase was coined in 1979.

File photo - An Emirates Air Line cable car is silhouetted against the backdrop of the 'supermoon' in Greenwich, London, Tuesday, Feb. 19, 2019. (Yui Mok/PA via AP)

The Moon will appear particularly large when it is close to the horizon thanks to an optical illusion known as “the moon illusion.”

“This “Moon illusion” happens when the Moon is close to the horizon and there are objects within our line of sight such as trees or buildings,” explains NASA, in a blog post. “Because these relatively close objects are in front of the Moon, our brain is tricked into thinking the Moon is much closer to the objects that are in our line of sight. At Moon rise or set, it only appears larger than when it is directly overhead because there are no nearby objects with which to compare it.”