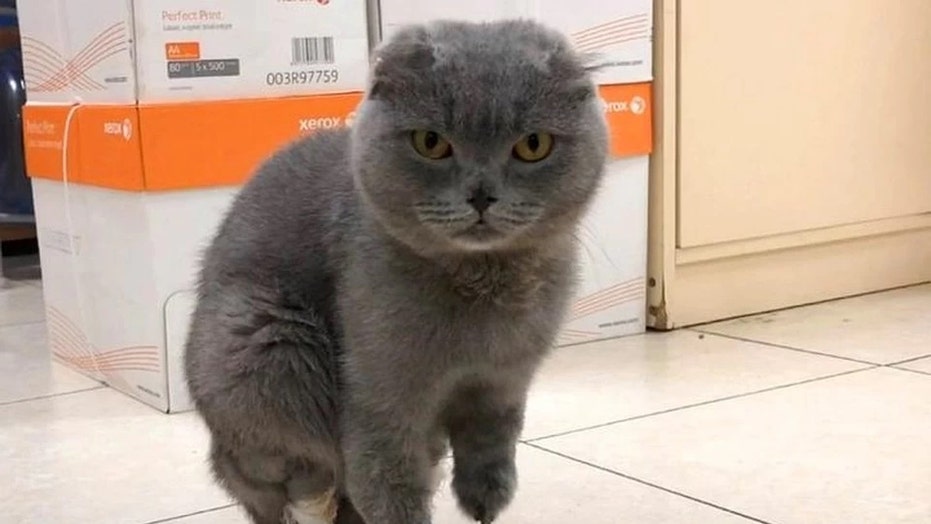 A female cat in Russia, Dymka, has been given a new lease on life after veterinarians performed surgery to replace her front and hind-leg paws with 3D-printed prosthetics made from titanium.

Veterinarian Sergei Gorshkov worked with researchers from Tomsk Polytechnic University in Tomsk, Russia to create the metal paws, which were fused to the cat's leg bones, the university said in a statement.

"Thus, Dymka became the second cat in the world with prostheses of all four limbs. The cat’s new front and rear paws have an individual model that was printed using titanium on a 3D printer," the university wrote in the statement.

"To reduce the risk of implant rejection by the cat’s body, the TPU scientists applied a microactive calcium phosphate coating through micro-arc oxidation," the university added. "The external parts of the prosthesis are also printed on a 3D printer and made in the shape of cat’s paws."

The 4-year-old cat was rescued after being spotted in December 2018 on a road in Siberia suffering from extreme frostbite, according to Live Science. Not only did Dymka lose her paws, but she also lost her ears and tail due to the extreme temperatures, according to the statement.

Dymka is now able to lead a full, normal life, the university said, noting she is able to walk, run, play and overcome stairs. A video has been posted to YouTube detailing her journey.

In 2016, the clinic performed a similar procedure for a male cat known as Ryzhik, who also suffered from frostbite.