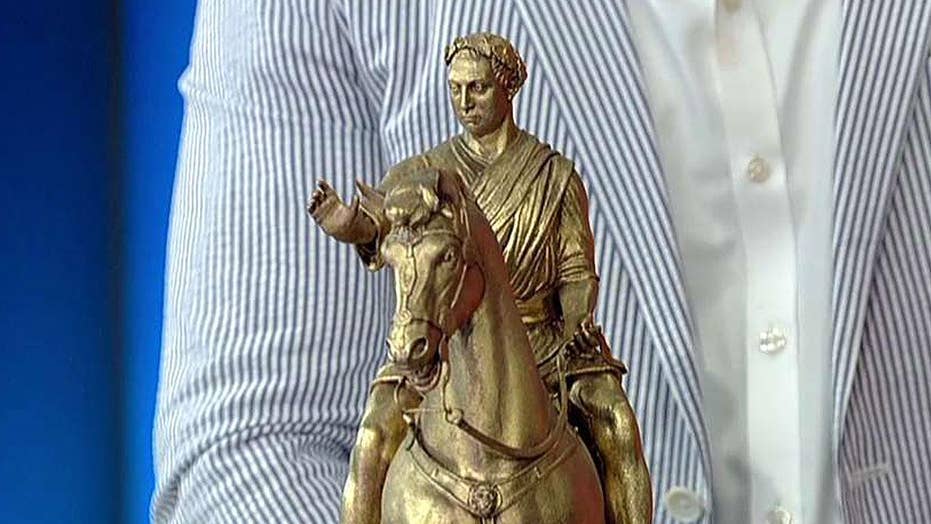 A storied Revolutionary War musket ball that was melted from a famously toppled statue of King George III has gone on display in Philadelphia.

Experts believe that the ball is one of more than 42,000 melted from a statue of King George III that once stood on Bowling Green in Lower Manhattan. The statue was torn down by a mob of soldiers and sailors on July 9, 1776.

Dubbed “Melted majesty,” the musket balls were used to fight the British during the Revolutionary War, according to the Museum of the American Revolution, where the ball is now on display.

A spokeswoman for the Museum told Fox News that the musket ball was discovered across the street from Monmouth Battlefield State Park in New Jersey nearly 25 years ago by archaeologist Dan Sivilich.

The place where Sivilich found the musket ball with a metal detector was then private property, but is now part of the State Park.

The battle of Monmouth, one of the largest battles of the Revolutionary War, was fought on June 28, 1778.

Another eight musket balls were subsequently found within the Monmouth Battlefield State Park, as part of one of America’s first controlled battlefield excavations. In 2015, the nine balls were tested using X-ray fluorescence spectrometry (XRF) and compared to fragments of the statue in the collection of the New York Historical Society. The balls’ composition of lead and tin was discovered to match combination of lead and tin in the surviving pieces of the statue.

“Being able to display this musket ball really brings this story full circle, signifying the transformation from loyal subjects of a king to radical Revolutionaries,” said Philip Mead, chief historian and director of curatorial affairs at the Museum, in a statement. “From the protests that still take place there to the installation of the ‘Fearless Girl’ statue, it is interesting to see that Bowling Green is still a site for revolutionary statements as a people have continued to expand those ideals of liberty and equality.”

Museum staff also took the musket ball to Bowling Green in Lower Manhattan on July 4, which is believed to be the first time that that piece of the statue has been back to that site since 1776.

Just ahead of the 241st anniversary of the statue’s toppling, the Museum of the American Revolution has built an impressive display to tell the musket ball’s fascinating story.

The display containing the musket ball also contains two fragments of the statue, which are on loan from the New York Historical Society, as well as tools similar to those used by the women of Litchfield, Conn. to melt pieces of the statue into musket balls.

The display case is embedded within an 8 ft. marble pedestal that holds a replica of the King George III statue created by Brooklyn sculptural studio StudioEIS. The replica is the first to be made of the famously toppled statue. A figure of a sailor “throwing” a rope to visitors is also next to the statue.

SHE WAS ONE OF GEORGE WASHINGTON'S SLAVES, UNTIL SHE MANAGED TO ESCAPE

The spokeswoman for the Museum told Fox News that the musket ball went on display Thursday morning.