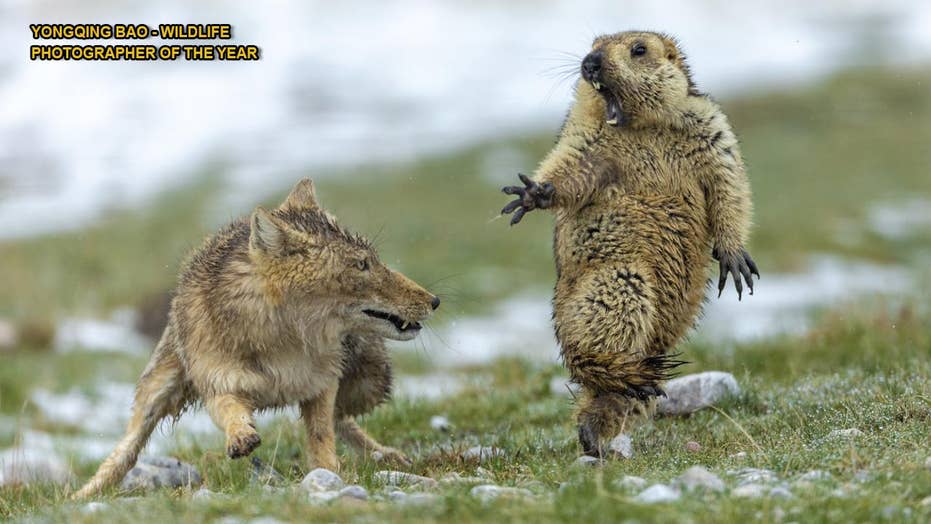 Photographer Yongqing Bao has won the grand title of Wildlife Photographer of the Year by capturing what is being described as the 'perfect' wildlife moment. In the image, a Tibetan fox is shown attacking a terrified Himalayan marmot while hunting to keep her three cubs alive. The competition winners were named during an awards ceremony at London's Museum of Natural History.

A remarkable photo of a fox battling a marmot in the remote Qilian mountains of China has won the top award in the prestigious Wildlife Photographer of the Year competition.

The image, captured by Yongqing Bao, shows the Tibetan fox attacking the terrified Himalayan marmot. Dubbed “The Moment,” the photo clinched the grand title in the competition, which saw 48,000 entries received from 100 countries.

The competition winners were named during an awards ceremony at London’s Museum of Natural History on Tuesday.

ENORMOUS LION TERRIFIES PHOTOGRAPHER WITH LOUD ROAR — THEN SMILES AT HIM

“Photographically, it is quite simply the perfect moment. The expressive intensity of the postures holds you transfixed, and the thread of energy between the raised paws seems to hold the protagonists in perfect balance,” said Roz Kidman Cox, chair of the judging panel, in a statement. “Images from the Qinghai-Tibet Plateau are rare enough, but to have captured such a powerful interaction between a Tibetan fox and a marmot -- two species key to the ecology of this high-grassland region -- is extraordinary.”

The Natural History Museum notes that, while Tibetan foxes are not hunted or persecuted, their prey is. “The foxes are dependent on a small mammal known as the plateau pika, a species which has been subject to eradication attempts,” it said, in its statement. “If the pikas are wiped out, the foxes will be quick to follow.”

“The area in which this was taken, often referred to as the ‘Third Pole’ because of the enormous water reserves held by its ice fields, is under threat from dramatic temperature rises like those seen in the Arctic,” he said in the statement. “At a time when precious habitats are facing increasing climate pressures, seeing these fleeting yet fascinating moments reminds us of what we need to protect.”