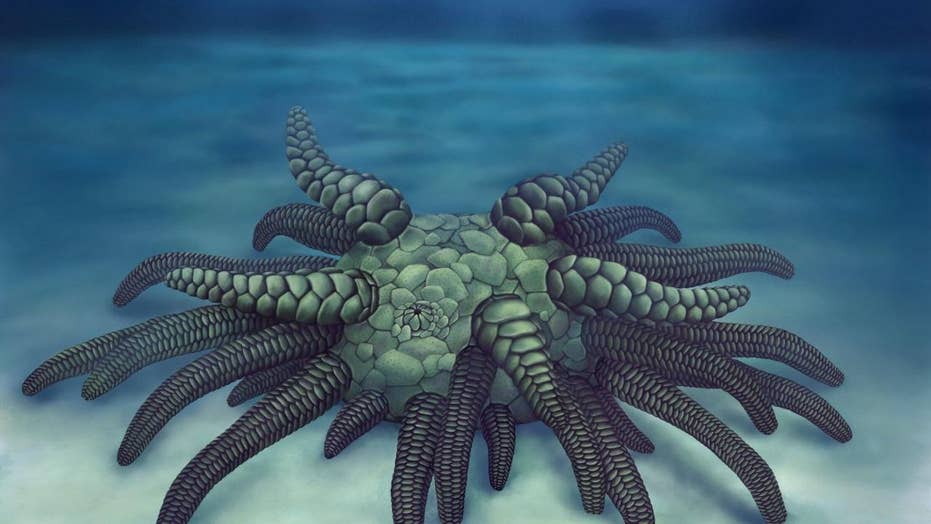 The fossilized remains of a 430 million-year-old ‘sea monster’ has been discovered near Herefordshire, Britain.

The fossilized remains of a 430 million-year-old sea creature that had tentacles longer than its body have been found in Herefordshire, Britain.

Given the name Sollasina cthulhu, due to its resemblance to the fictional Cthulhu sea beast thought of by American author H.P. Lovecraft, the creature was significantly smaller than the fictional monster, but perhaps just as scary to other sea creatures alive at the time.

"Although the fossil is just 3 [centimers] wide, its many long tentacles would have made it appear quite monstrous to other small sea creatures alive at the time," a press release describing the find reads. "It is thought that these tentacles, or 'tube feet', were used to capture food and crawl over the seafloor."

Sollasina cthulhu was a type of sea cucumber and its 45 tentacles likely helped it walk along the seafloor, researchers noted. They were also able to look at it in 3-D, which gave researchers a deeper look into the creature's soft tissue.

"Using physical–optical tomography and computer reconstruction, we visualize the internal anatomy of S. cthulhu in three dimensions, revealing inner soft tissues that we interpret as the ring canal, a key part of the water vascular system that was previously unknown in fossil echinozoans," researchers wrote in the study's abstract.

The study's co-author, Dr. Jeffrey Thompson, was surprised it was a sea cucumber, originally thinking it might be a closer relative to sea urchins.

"We carried out a number of analyses to work out whether Sollasina was more closely related to sea cucumbers or sea urchins," Dr. Thompson said in the release. "To our surprise, the results suggest it was an ancient sea cucumber. This helps us understand the changes that occurred during the early evolution of the group, which ultimately gave rise to the slug-like forms we see today."

The research was published in the scientific journal Proceedings of the Royal Society B.