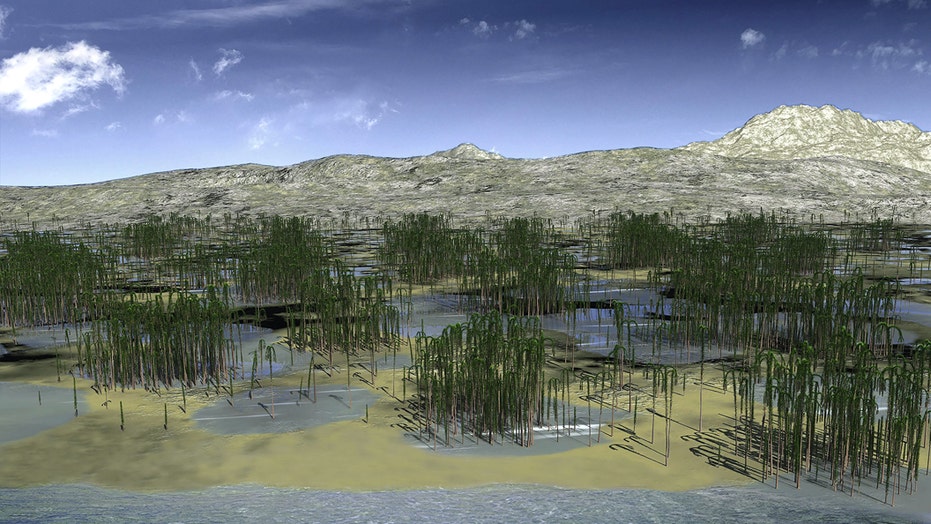 The fossilized remains of a 419 million-year-old forest have been found in China, giving researchers new insights into a time when life began to emerge from the sea.

The site, which is approximately the size of 35 soccer fields (250,000 square meters, or 2.6 million square feet), was discovered near Xinhang in China's Anhui province. The Devonian era-forest was packed with lycopsid, a branchless tree similar to palm. The area is one of only three forests like it known to exist, with the others located in America and Norway.

"The large density as well as the small size of the trees could make Xinhang forest very similar to a sugarcane field, although the plants in Xinhang forest are distributed in patches," said one of the study's co-authors, Deming Wang, in a statement.

Monospecific lycopsid forest in coastal habitat. The site, the size of 35 football pitches, was full of lycopsid, a branchless tree similar to palm that grew at a time when fish were just beginning to crawl out of the sea. (Credit: SWNS)

Wang added: "It might also be that the Xinhang lycopsid forest was much like the mangroves along the coast, since they occur in a similar environment and play comparable ecologic roles."

After the Devonian period, which ended 359 million years ago and is known as the "age of fishes," giant lycopsids popped up during the Carboniferous period. These giant lycopsids became part of the coal that is being mined today, the statement added.

The fossilized trees can be seen in the walls of the Jianchuan and Yongchuan clay quarries, underneath and above a sandstone bed that's four meters [13.1-feet] thick. Other fossilized finds include a pinecone-like structure with megaspores and some fossilized tree trunks used to estimate the height of the trees, Wang noted.

The research was published in the scientific journal Current Biology.