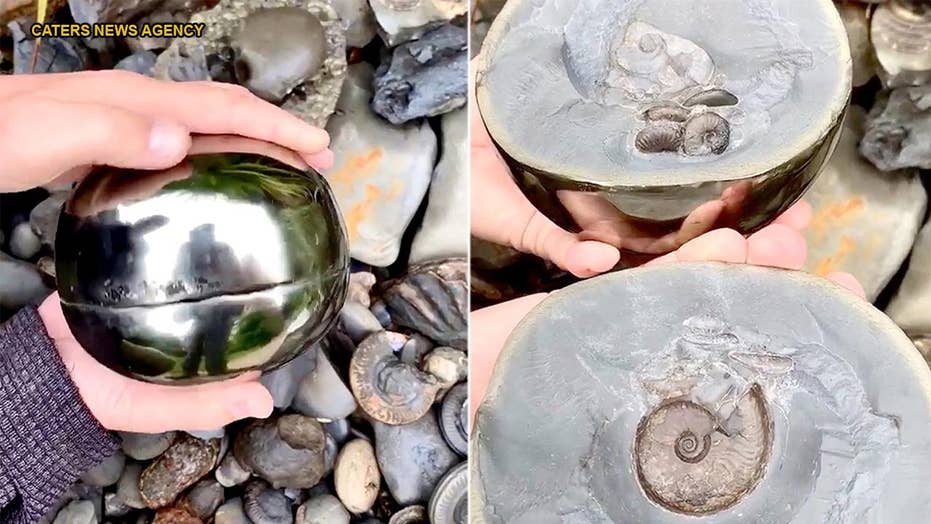 A fossil hunter discovered a 185-million-year-old 'golden snitch' containing an extinct sea creature inside. The amateur archaeologist found spiral-shaped fossils of cleviceras, an extinct type of cephalopod creature, within the Quidditch ball-shaped rock.

Quidditch ball-shaped fossils are just some of the many discoveries made by amateur archaeologist Aaron Smith.

The medical student has found several fossils that date back to the Jurassic period on the beaches of Whitby in Yorkshire.

Perhaps the most spectacular is a 185-million-year-old fossil encased by what looks like a 'golden canon' ball.

It is technically a rock that is coated in iron pyrite, also known as 'fools gold', and if you shine this material, just like Smith did, then it turns shiny and gold.

The phenomenal piece of history is thought to be 185 million years old and was found on Sandsend Beach.

Mr. Smith, 23, is a seasoned fossil collector and continues to go and explore the seaside in hope of finding similar treasures.

He said: “In order to find fossils, pretty much anywhere in the world, you just need to put in a lot of dedication!

"The majority of the time there is nothing really to be found but every now and again, if you’re lucky enough, and something has appeared due to a storm for example, then you might find a rock with a fossil inside it.

“When you find a fossil, then the long intricate process begins of carefully removing the stone to expose the fossil, this can take hundreds of hours in many cases.

“It’s very exciting discovering the fossils. It makes it all worthwhile after spending months of searching.”

When the medical student opened up one of his freshly shined piece of iron pyrite he found spiral-shaped cleviceras fossils.

Cleviceras are an extinct type of cephalopod creature.

The best-known cephalopods today are probably squids and octopuses.

The golden-snitchlike spheres with a limestone core are actually common along the Yorkshire coastline and can be found among the stones and shales.

Mr. Smith has previously posted a video of the golden-snitch fossil online and captioned it: "Here's a video of us opening one of our huge Cannon Ball fossils.

"The limestone nodule is coated in Iron Pyrite, meaning we can polish it to become Golden, seen in our previous videos.

"It still impresses me that these 185 million-year-old fossils are along our beautiful Yorkshire Coastline waiting to be found."