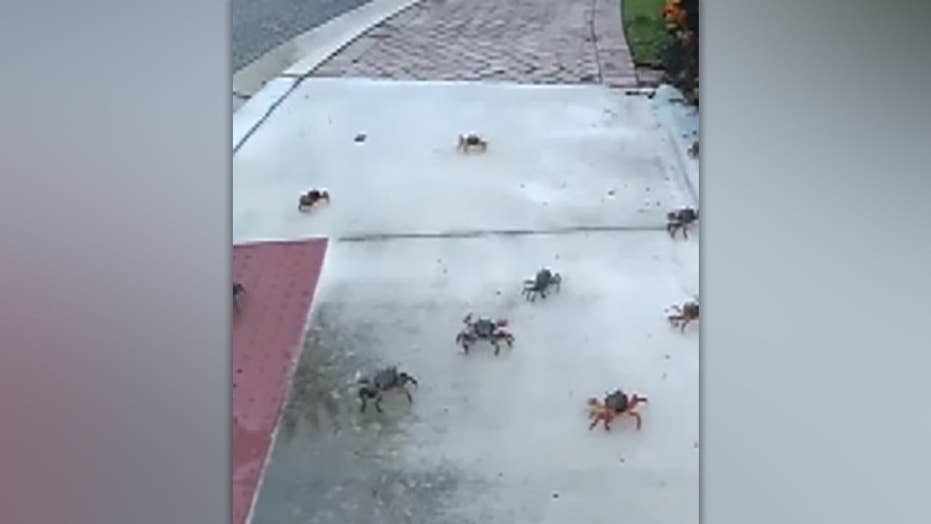 A Florida woman taking a stroll through her neighborhood was shocked to find an invasion of blue land crabs scattering across the street.

Abriel Arnel, a Stuart resident, posted a video to Facebook showing hundreds of the sea critters crawling around her home.

‘INVASION’ OF LAND CRABS AT FLORIDA HOME CAUGHT ON VIDEO

"We've lived here for a few years and this is the worst we've seen them!" she told Orlando’s FOX35. “I was told they are blue land crabs. Apparently, they burrow throughout the year, but it's during this season (and their spawning season) when the heavy rain forces them out."

Abriel Arnel, a Stuart resident, posted a video to Facebook showing hundreds of the sea critters crawling around her home.  (Abriel Arnel)

The blue land crab can be found in low-lying coastal counties in southern Florida. According to the University of Florida’s Institute of Food and Agricultural Sciences, the crustaceans' mating season begins in June and peaks in October, during which time the female crabs migrate to the ocean.

Arnel told the local station that she’s even seen the crabs outside her front door.

Last month, a Florida homeowner in Port St. Lucie shared a video which appeared to show land crabs crawling all over his porch after the critters were rained out of their burrows.