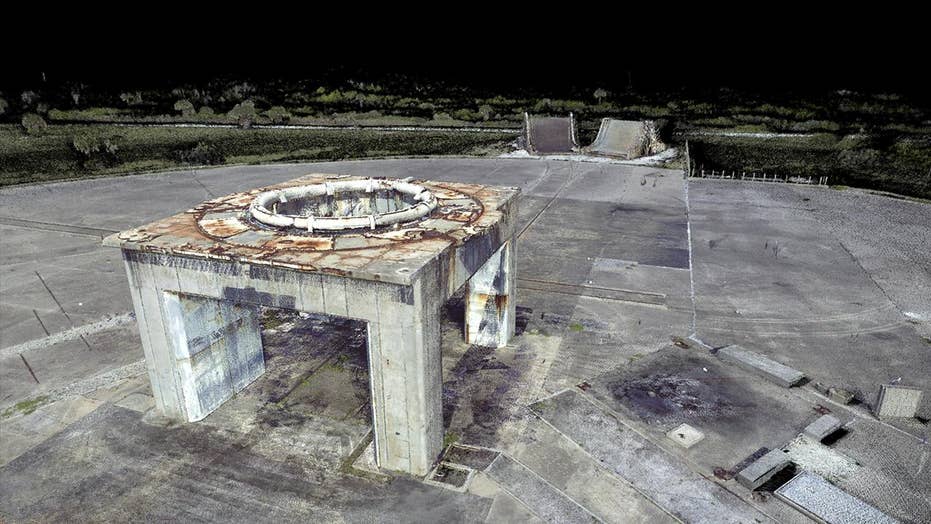 From America's first satellite to its first reach for the stars, some of the Cape Canaveral sites built to launch the country's space race and defense programs now look like ancient ruins. Now a team of Florida researchers is creating ways for future generations to appreciate the sites where man was launched to new frontiers through virtual reality.

CAPE CANAVERAL, Fla. - From John Glenn’s orbit of the earth to the Mercury Missions that led the United States into space, the historic sites built to launch the country’s space race and defense programs now look like ancient ruins.

"The salt air is corrosive, so a lot of the metal parts are eroding," explained Tom Penders, the cultural resources manager for the Air Force's 45th Space Wing at Patrick Air Force Base in Cape Canaveral, Fla. "Every time there's a tropical storm or hurricane, we have storm surges, beach erosion and large wind and rain events, it damages these launch complexes."

The destruction is leaving some of the launch pads that sent astronauts to space beyond repair. So now, scientists are now trying to recreate these historic launch pads using virtual reality technology, so that future generation can see what they looked like before they completely wear away.

"The only alternative we have is to document them," Penders said. "There’s traditional documentation aspects, but high-definition 3D laser scanning can do it in a quarter of the time and a quarter of the price."

NEARBY 'SUPER-EARCH' MAY BE HABITABLE, NASA SUGGESTS

They are working in collaboration with Penders to document the historic sites using newly-available GPS surveys and 3D technology that can measure to the accuracy of about half a human hair.

The USF team has recorded Launch Complex 34 where on January 27, 1967, one of the great tragedies of NASA's human spaceflight program took place. The Apollo 1 capsule caught fire during a countdown simulation and test rehearsal, killing all three astronauts inside. Today, the site is part of a National Historic Landmark and is an established memorial to the astronauts. (Fox News/Allie Raffa)

Collins said the launch pads were not built to be historic artifacts. But now historians are looking for ways to preserve them any way they can.

"The engineers that were designing a lot of these things were not thinking ‘We're going to preserve this forever for all of humankind,’" Collins said. "They were thinking about how to successfully get somebody to the moon.”

The team travels from Tampa to Cape Canaveral to document the dilapidated sites in painstaking detail in order to better understand the site layout, extent and condition.

For every week they spend on the Space Coast recording data, Collins said they are in their lab for a month processing the information.

"We have the whole entire site down to...millimetric scale, down to the rivets, and you know how that rust is impacting the metal. When you have the 3D data you can really start to see how all these things fit together to actually create the engineering that got people into space,” she said.

Collins reports her findings to Penders to help him decide whether a site is worth investing in restoring or should be torn down for other uses.

"The data they provided me was incredible," he said. "I could literally look in between the blocks and see the damage that was done in between each individual block."

He said that way he could predict how much longer they will last and whether they are worth preserving right away.

“Do we want to spend money now on something that might be gone in 50 to 60 years?” Penders said he has to ask himself.

Collins said the partnership was born five years ago with a federal grant of roughly $100,000 a year for the research being done to preserve and protect or better manage a crumbling site.

Some of the history being saved pre-dates the country’s space program.

“People don't realize that the Cape was not developed to put men into space…it was a research and development facility for all these different missile programs for U.S. defense during the Cold War,” Penders said.

The team is even documenting prehistoric burial mounds along the nearby Banana River and a camp at the tip of the cape called “Stink Town” because shark livers were once harvested there, Penders said.

“There were prehistoric people living at Cape Canaveral. There were historic settlements and communities before it actually became an airbase,” said Collins.

Some historic launch pads in Cape Canaveral appear frozen in time. Astronaut John Glenn, the first American to orbit the Earth, still has a labeled parking space at the entrance to Launch Compex 14. (Fox News/Allie Raffa)

Some of the researchers working on this project are children of the Apollo era and remember watching Neil Armstrong and Buzz Aldrin walk on the moon on their black-and-white TV's. Now, they're the ones making history, creating ways for future generations to appreciate the sites where man was launched to new frontiers through virtual reality.

"We're using these tools to document the way they are now, to know where it started, where it is now and where it's going to be in the future," Collins added.

Collins and her team hope to educate the public with their work, offering certain site maps to be downloaded and explored from home through virtual reality.

“This is one of the ways in which we’re getting this project out to the world,” she said.

Penders said some viable launch pads are unused but have great potential for reuse by private companies, some of which have already taken advantage of the opportunity as the commercial space industry continues undergoing drastic changes.

Today, deep-pocketed investors have built up dozens of private launch companies along Cape Canaveral; 20 launches took off from the area last year, and companies are aiming to launch more than two dozen more by 2020.

Penders says seven launch sites have been documented so far and that he hopes to have the entire cape scanned and recorded by 2023.