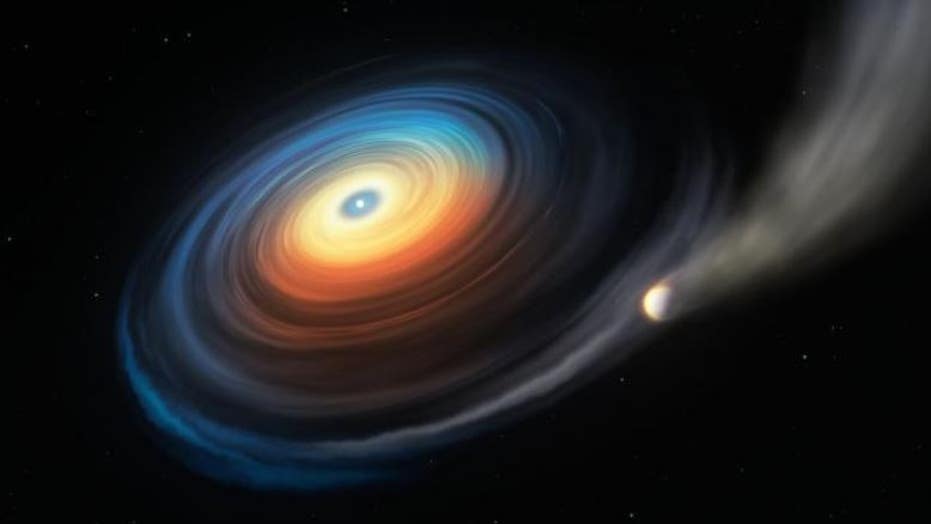 For the very first time, scientists have found evidence of a giant planet associated with a white dwarf star.

Researchers used ESO's Very Large Telescope to gain a stronger understanding of the properties of the star named WDJ0914+1914.

"It was one of those chance discoveries," researcher and study lead Boris Gänsicke, from the University of Warwick in the United Kingdom, said in a statement.

The team's follow-up observations, published in a new study in Nature, showed the presence of hydrogen, oxygen and sulphur associated with the white dwarf.

By analyzing the spectra taken by ESO's X-shooter instrument, the team discovered that these elements were in a disc of gas swirling into the white dwarf, and not coming from the star itself.

This illustration shows the white dwarf WDJ0914+1914 and its Neptune-like exoplanet. (ESO/M. Kornmesser)

According to a press release detailing the study's findings, the detected amounts of hydrogen, oxygen and sulphur are similar to those found in the deep atmospheric layers of cold, giant planets like Neptune and Uranus.

Scientists believe that if this type of planet was orbiting near a hot white dwarf, the extreme ultraviolet radiation from the star would strip away its outer layers, and some of this stripped gas would swirl into a disc, itself coming together onto the white dwarf.

And that is what researchers think they are observing around WDJ0914+1914: the first evaporating planet orbiting a white dwarf.

"It took a few weeks of very hard thinking to figure out that the only way to make such a disc is the evaporation of a giant planet," Matthias Schreiber from the University of Valparaiso in Chile, who computed the past and future evolution of this system, said in a statement.

"The discovery also opens up a new window into the final fate of planetary systems," Gänsicke added.