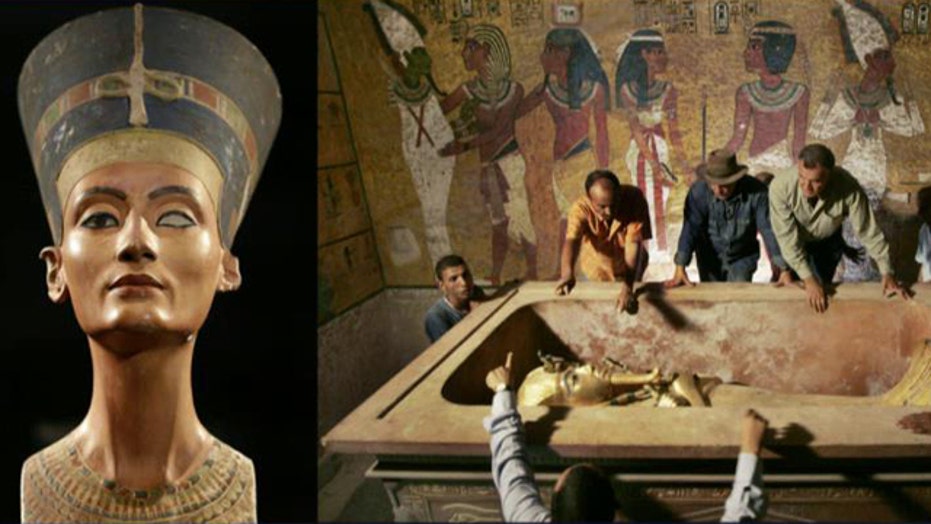 Could Egyptian queen Nefertiti be hidden in King Tut's tomb?

The Egyptian Antiquities Ministry is inviting British-educated expert Nicholas Reeves to Cairo to debate his theory that the tomb of Queen Nefertiti may be located behind King Tutankhamun’s 3,300-year-old tomb in the famed Valley of the Kings.

A statement Wednesday said Reeves would debate the theory with Egyptian colleagues and noted there could also be a joint expedition to Luxor, where the 18th Dynasty King Tut's tomb is located.

Reeves argues that Tut, who died suddenly at the age of 19, may have been rushed into an outer chamber of Nefertiti's original tomb. He says high resolution images show Tut's tomb might have two unexplored doorways.

Some archeologists believe the mummy of Nefertiti, fabled for her beauty, has already been found in a different tomb.

Reeves told the Times of London that he discovered the bricked-up "ghosts" of the doorways after examining digital scans of the walls of Tutankhamun's tomb in the Valley of the Kings, across the Nile River from Luxor in southern Egypt. He believes that one of the doorways leads to a little-used storeroom, but the other, on the north side of the tomb, leads to "the undisturbed burial of the tomb's rightful owner."

If Reeves is correct, the room containing Tut's tomb -- discovered by English archaeologist Howard Carter to global acclaim in 1922 -- was built to be an antechamber to that of the more illustrious and glamorous Nefertiti. It would also explain some facts about Tutankhamun's resting place that have puzzled researchers, such as the small size of Tut’s tomb, the second-hand artifacts he was buried with and the apparent different dates of painted decorations.

"Only one female royal of the late 18th Dynasty is known to have received such honours [sic], and that is Nefertiti," Reeves wrote in a report published by the Armana Royal Tombs Project.

Nefertiti, who bore the titles "Lady of All Women" and "Mistress of Upper and Lower Egpyt" during her lifetime, ruled as the chief consort of the pharaoh Akhenaten in the late 14th century B.C.. She is believed to have died in around 1330 B.C., approximately seven years before the estimated date of Tutankhamun's death.

Despite her fame and power during her lifetime, no one is quite sure where she has been buried.
Some believe she was buried at Armana, the capital city established by her husband approximately 250 miles north of the Valley of The Kings. Others say one of two mummies discovered in the Valley of the Kings may be the former Queen of Egypt.