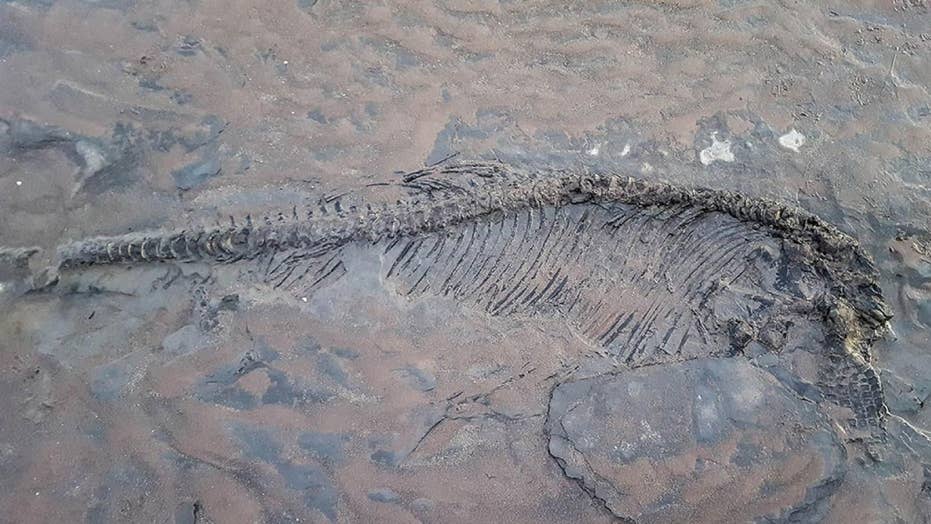 A British man discovered a 65-million-year-old ‘ichthyosaur’ skeleton on a beach in Stolford, Somerset.

It's a find 65 million years in the making.

A British man was walking his two dogs on the coasts near Stolford, Somerset on Saturday when he stumbled upon what is believed to be the fossilized remains of a 65-million-year-old ichthyosaur, The Sun reports.

"I often go to the beach walking with my dogs, and when the tide goes out we go to the rocks because they like playing there," Jon Gopsill said to The Sun. "We were at the beach when I saw this thing and thought 'What's that?' so I went a bit closer and thought 'wow'. I realized that it was amazing, museum-quality stuff. As soon as I saw it, I knew I found something special."

A dog walker was left stunned when his pooches led him over to a bone while walking on the beach - and accidentally discovered a 65-million-year-old ichthyosaur skeleton. (Credit: Caters News Agency)

MASSIVE 205M YEAR-OLD ICHTHYOSAUR FOSSIL DISCOVERED, 'ONE OF THE LARGEST ANIMALS EVER'

"I thought it was obviously a fossilized sea creature, possibly an ichthyosaur," Gopsill, 54, added. "I was just blown away to see it there. It really is incredible that is has survived for such a long time and is now just there for everyone to see."

Though the five-and-half-foot fossils need to be thoroughly examined, experts are almost certain it is an ichthyosaur.

The skeleton - which Jon believes to be of a prehistoric ichthyosaur - was unearthed after a week of rough seas on the south coast. The ichthyosaur was a prehistoric porpoise-like sea mammal that lived during the Jurassic period. (Credit: Caters News Agency)

"Looking at this specimen, based on the number of bones in the pectoral paddle, the apparent absence of a pelvic girdle, as well as the distinctive 'hunch' of the back, this is likely to be the remains of an ichthyosaur," Dr. Mike Day, a curator at London's Natural History Museum, told The Sun. "It is not possible to identify the exact type of ichthyosaur from these images alone, however."

Ichthyosaur means "fish lizard," an apt way to describe the giant sea-dwelling creature. The earliest known ichthyosaurs had long, flexible bodies and likely swam similar to modern-day eels, according to an article from the University of California Berkely.

Some ichthyosaur fossils discovered have shown the creatures to give birth to live, developed young. Unlike dinosaurs, which ichthyosaurs have been confused for, they did not lay eggs.

In January 2019, researchers used 3-D technology to unlock the secrets of a nearly 200-million-year-old ichthyosaur skull, which was discovered in a U.K. farmer’s field in 1955.