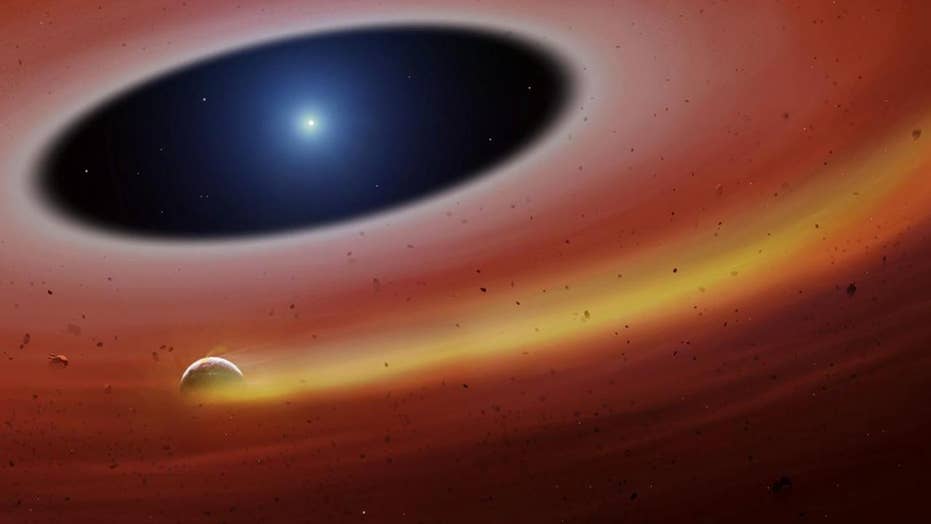 A new study published in 'Science' shows the possible fate of our beloved planet Earth, based on the history of an unnamed dead planet.

A terrifying new study may have provided a window into Earth's ultimate fate by looking at a newly discovered dying planet nearly 400 light years away.

The study, published in Science, shows that the chunk of the unnamed dead planet (known as a "planetesimal") has a metal core and is circling the white dwarf star, known as SDSS J122859.93+104032.9, once every two hours.

"The white dwarf's gravity is so strong – about 100,000 times that of the Earth's – that a typical asteroid will be ripped apart by gravitational forces if it passes too close to the white dwarf," the study's lead author, Dr. Christopher Manser, a professor at the University of Warwick said in a statement.

10 TIMES 'EXPERTS' HAVE PREDICTED THE WORLD WOULD END BY NOW

Dr. Manser added: "The star would have originally been about two solar masses, but now the white dwarf is only 70% of the mass of our Sun. It is also very small – roughly the size of the Earth – and this makes the star, and in general all white dwarfs, extremely dense."

The discovery of the planetesimal, which is 410 light-years away from Earth, offers a hint of what planets reside in other solar systems, as well as a look at what will eventually happen to Earth, Dr. Manser said.

The unnamed planet was discovered using the Gran Telescopio Canarias in La Palma.

Despite its clearly diminished state, the unnamed planet has not completely died because of its metal core, the researchers suggested.

"If it was pure iron it could survive where it lives now, but equally it could be a body that is rich in iron but with internal strength to hold it together, which is consistent with the planetesimal being a fairly massive fragment of a planet core," said a co-author of the study, professor Boris Gaesicke, in the statement.

"If correct, the original body was at least hundreds of kilometers in diameter because it is only at that point planets begin to differentiate – like oil on water – and have heavier elements sink to form a metallic core," Gaesicke continued.

Israel’s Beresheet lunar lander captured this image of Earth on March 31, 2019, from a distance of about 9,940 miles (16,000 kilometers). The Arabian peninsula and southeastern Africa are visible.

"As stars age they grow into red giants, which 'clean out' much of the inner part of their planetary system," he continued. Dr. Manser noted that the Sun will continue to expand to where the Earth is orbiting, wiping out not only our planet, but Mercury and Venus as well. Mars will be pushed out and continue to survive as the Sun expands, the researchers said.

"The general consensus is that 5-6 billion years from now, our Solar System will be a white dwarf in place of the Sun, orbited by Mars, Jupiter, Saturn, the outer planets, as well as asteroids and comets," Dr. Manser continued.

"Gravitational interactions are likely to happen in such remnants of planetary systems, meaning the bigger planets can easily nudge the smaller bodies onto an orbit that takes them close to the white dwarf, where they get shredded by its enormous gravity," Dr. Manser concluded.