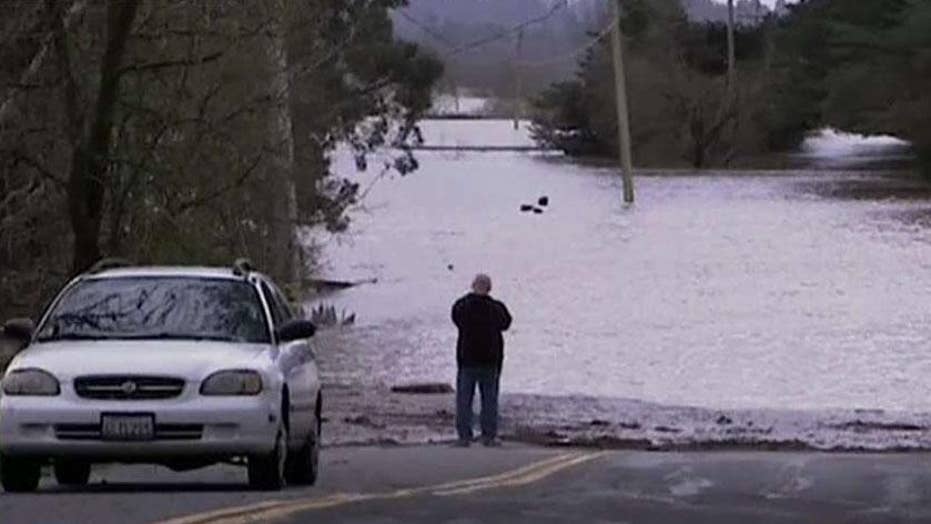 LOS ANGELES -- California’s rainy season could be the wettest in 40 years, but experts say the state is missing a major opportunity by failing to collect the trillions of gallons of storm runoff that currently flows wastefully into the ocean.

“We will never capture it all, but we need to do a better job of capturing what we can,” said Peter Gleick of the Pacific Institute.

In February alone, an estimated 18 trillion gallons of water fell on the state. In urban areas and coastal cities, 80 percent ends up diverted into the ocean, as Los Angeles and other cities built long concrete channels for flood control. The Los Angeles River, for example, is a 51-mile-long canal as wide as a football field. Almost none of the water seeps into the underground aquifer.

“The challenge is: How do we capture more of that water to use it so we can use it during dry parts of the year? And cities in California have not historically done a good job of capturing what we call stormwater,” said Gleick, who helped author a study showing how San Francisco and Southern California could harness up to 630,000 acre feet annually (one acre foot is equal to 326,000 gallons) or up to 8 percent of average annual statewide urban use. An institute study concluded, “stormwater capture is among the most cost effective new source of water available in California.”

In the past, the state relied on a vast network of nearly 50 dams and reservoirs to capture and bank snowpack from the Sierra Mountains. Snow that melted in the spring and summer was pumped south into the Central Valley for growing and to serve thirsty cities till the rainy season begins in December.

For years, the system worked seamlessly, providing for economic growth and agricultural expansion. However, the population has surged in recent decades.

The state handled previous droughts in 1976 and 1988. But, the last five-year drought, from 2012 to 2016, brought a 25 percent mandatory reduction in urban use. Crops died, farmers went out of business and then-Gov. Jerry Brown proposed fining residents $10,000 a day for wasting water.

Suddenly the state realized it needed a new approach. Voters approved $2.7 billion in bonds for new water storage projects. The first of those, however, is still five years away from completion – and many won’t be done until 2030 or beyond, leaving the state vulnerable to the next drought.

“As Californians, we have to pull together and save water in every way we can,” Brown said at the time.

Two months ago, in his State of the State address, new Gov. Gavin Newsom said: “Our water supply is becoming less reliable because of climate change.”

Experts predict longer droughts and more floods. Yet, the state turned down an offer from the Trump Administration to raise Shasta Dam, providing 14 percent more water for California.

This past weekend, even former Republican Gov. Pete Wilson weighed in on the debate, telling the Los Angeles Times that he tried to build more dams in the '90s, but “Democratic majorities in the Legislature (and) no growth advocates in Washington and Sacramento (stopped him) given the signal surface collection was not politically in season.”

Now it is. Besides conservation, California and local water departments are planning multiple stormwater-capture plans.

“There is still a debate in California about the value of building new concrete infrastructure like new dams,” Gleick said. “If we can find decent places to build them or raising Shasta, for example, vs. cutting demand or being more efficient.”