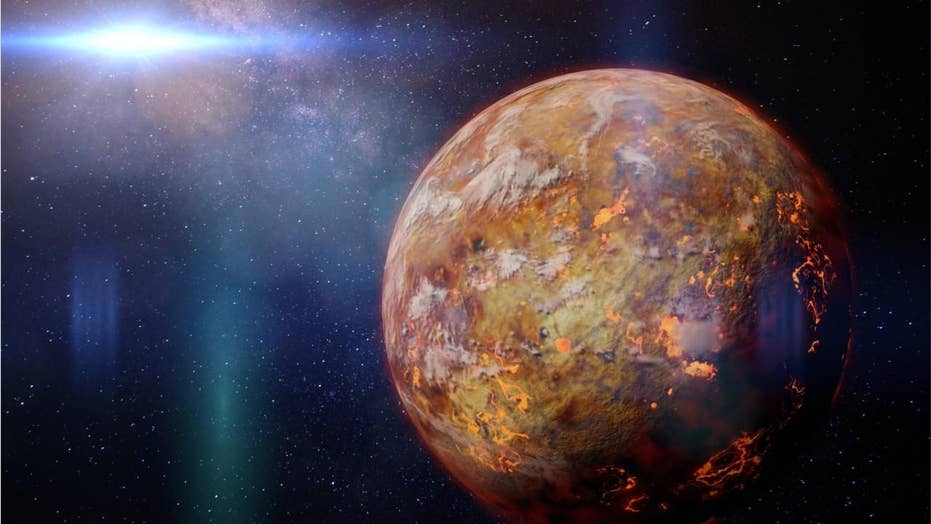 Planets that have been dead for almost a billion years may still be able to "broadcast" their signals in space, according to a new study.

According to research published in the Monthly Notices of the Royal Astronomical Society, planets that have been stripped down to their cores by their stars interact with that star (likely at the end of its lifespan and thus, a white dwarf) and send out radio waves, thanks to the magnetic field between the two celestial bodies. The radio waves are often picked up by radio telescopes on Earth.

“There is a sweet spot for detecting these planetary cores: a core too close to the white dwarf would be destroyed by tidal forces, and a core too far away would not be detectable," the study's lead author, Dimitri Veras, said in a statement.

This artist's rendering provided by the Harvard-Smithsonian Center for Astrophysics shows an asteroid slowly disintegrating as it orbits a white dwarf star. (AP)

"Also, if the magnetic field is too strong, it would push the core into the white dwarf, destroying it," Veras continued. "Hence, we should only look for planets around those white dwarfs with weaker magnetic fields at a separation between about 3 solar radii and the Mercury-Sun distance."

It's still unclear how long the planetary cores can survive after the planet is stripped by the star. The researchers' model dictates that in certain cases, the core can last for over 100 million years and perhaps as long as 1 billion years.

Veras added that no one has yet found the "bare core" of a major planet before, a major planet via magnetic signatures or a major planet around a white dwarf. "Therefore, a discovery here would represent 'firsts' in three different senses for planetary systems," Veras said.

Still, the researcher, along with his co-author, Pennsylvania State University professor Alexander Wolszczan, believe that the research they are doing now will eventually lead them to this discovery.

“We will use the results of this work as guidelines for designs of radio searches for planetary cores around white dwarfs,"  Wolszczan commented. "Given the existing evidence for a presence of planetary debris around many of them, we think that our chances for exciting discoveries are quite good.”