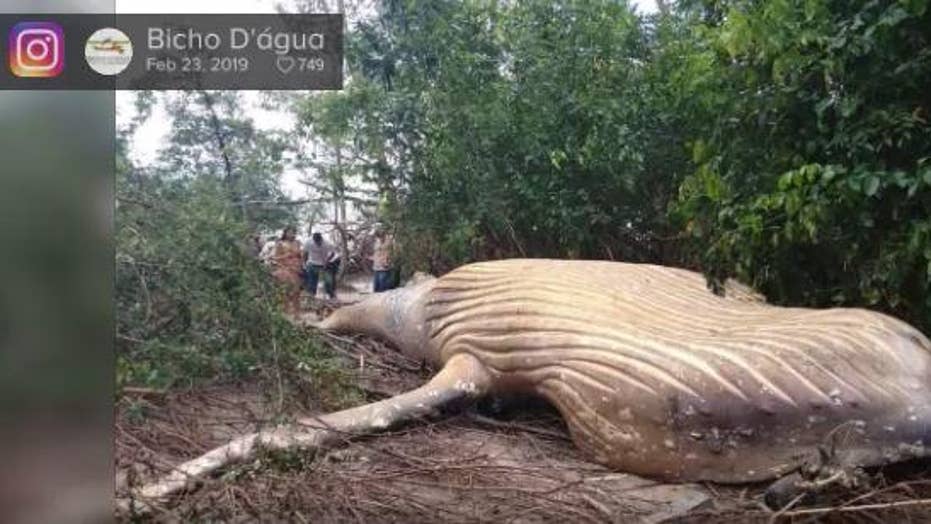 Experts are puzzled as to how a humpback whale ended up in Brazil's Amazon jungle.

Biologists were baffled to discover the body of a humpback whale being picked by vultures in the midst of trees and shrubbery in Brazil's Amazon jungle in late February.

The sea creature, which is roughly 26 feet long, was found dead about 50 feet from the shore of Araruna Beach, the Brazilian nonprofit Bicho D’água Institute says.

"It is not an adult animal, nor as large as it seems in the pictures," the conservation group explained in an Instagram post on Sunday, sharing several pictures of the whale carcass.

A team from the region's Municipal Secretariat of Health, Sanitation, and Environment (SEMMA) was alerted to investigate the incident. Marine experts with Bicho D’água believe a powerful tide may have launched the whale inland.

“We're still not sure how it landed here, but we're guessing that the creature was floating close to the shore and the tide, which has been pretty considerable over the past few days, picked it up and threw it inland, into the mangrove," Renata Emin, a marine specialist, told Brazilian news site O Liberal, according to Newsweek.

“Along with this astonishing feat, we are baffled as to what a humpback whale is doing on the north coast of Brazil during February because this is a very unusual occurrence," Emin continued, noting that it's also an odd time of year for humpback whale sightings.

Officials have ventured many guesses as to what contributed to the whale's demise — from succumbing to stress due to separation from its mother to consuming too much plastic.

Pollution is problematic for the environment and humans, but it's especially troubling for marine life.

A 2014 study published in a Public Library of Science journal revealed there's a minimum of 5 trillion pieces of plastic (weighing 268,940 tons) in our oceans — and that number is only expected to grow.

However, officials can't formally declare a cause of death for the animal until a necropsy is completed. Biologists have collected samples from the calf and will take apart its skeleton in order to reconstruct and relocate it to the Museu Paraense Emílio Goeldi, a natural history museum in the area, The Independent reports.

“Depending on the state of decomposition, some information may already have been lost," Emin told the British publication. “We are collecting as much information as we can get and identifying marks and wounds on its body to see if it was caught in a net or hit by a boat."

When mature, humpback whales can grow up to 62 feet and weigh around 40 tons — about the size of a bus, National Geographic states on its website. They feed mainly on krill, plankton and other small fish.